From Prague Spring to Soviet winter: 50 years since the Warsaw Pact invasion 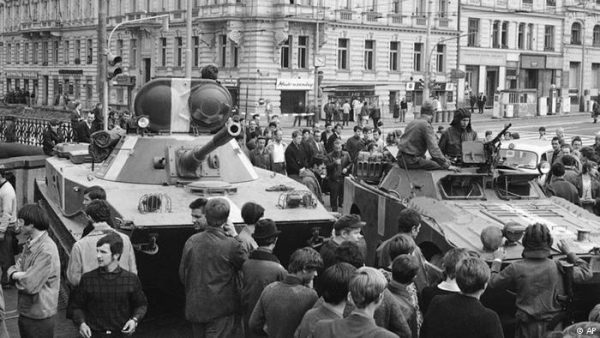 Some 250,000 Soviet and Warsaw Pact troops invaded Czechoslovakia overnight from August 20 to 21, 1968, to halt a blossoming political and cultural liberalisation, bringing an abrupt end to the Prague Spring and tightening the Kremlin’s grip.

The first months of 1968 had brought a renaissance of political and cultural life in what was then Czechoslovakia. Journalists and students were calling for an end to censorship, public rallies in support of reform erupted in Prague and beyond, and that year’s May Day commemorations were seized upon by those demanding greater freedoms.

Upon assuming the Czechoslovak leadership in January by becoming first secretary of the Communist Party of Czechoslovakia, Alexander Dubcek quickly declared his intention to push ahead with liberalisations that included freedom of speech and religion, an end to censorship and travel restrictions, and industrial and agricultural reforms.

By April the government had published an “action programme” outlining Dubcek’s plans to establish “socialism with a human face”. The plan provided for a gradual democratisation of the political system over a 10-year period, economic liberalisations and called for Communists to compete with other parties in future elections. The government officially ended its censorship policy in June.

Alarmed by these moves and what appeared to be the beginning of the end of Czechoslovak Communism, several fellow Warsaw Pact nations made their objections known in a July communiqué, saying the Czechoslovak reform programme “jeopardises the common vital interests of other socialist countries”.

Soviet-led military exercises in Czechoslovakia’s southern Sumava region that month also appeared designed to send a message to the leadership in Prague.

Soviet leader Leonid Brezhnev tried to curtail the Prague Spring’s momentum with a series of talks, meeting directly with Dubcek in late July in the small border town of Cierna nad Tisou. Brezhnev demanded key reformers be removed from leadership positions and restrictions be tightened on the media; Dubcek defended the reformist moves while reiterating his commitment to the Warsaw Pact and the Eastern Bloc economic alliance known as Comecon.

Unappeased, by mid-August the Kremlin had decided to intervene more forcefully.

Shortly before midnight on August 20, 250,000 Soviet and Warsaw Pact troops from Poland, Hungary, Bulgaria and East Germany (Romania and Albania refused to take part) invaded Czechoslovakia to put an end to the reform efforts, with the occupying forces eventually totalling 500,000. “Operation Danube” was the largest military mobilisation in Europe since the end of World War II.

At around 1am local time on August 21, the presidium of the Central Committee of the Communist Party of Czechoslovakia issued a statement calling on “all citizens of the Republic to keep the peace and not resist the advancing armies, because the defence of our state borders is now impossible”.

The army was told to remain in barracks and not intervene.

But ordinary Czechoslovak citizens poured into the streets in acts of resistance, confronting the soldiers directly and surrounding tanks in Prague and other cities. Students and others gathered on the capital’s main Wenceslas Square, stringing up banners calling for “Svoboda” (Freedom) and expressing support for Dubcek and his government. Crowds chanted, “Dub-cek! Svo-bo-da!”

“Dramatic scenes of Czech citizens in confrontation with confused soldiers of the invading armies played on television screens around the world,” wrote Michael Long in “Making History: Czech Voices of Dissent and the Revolution of 1989”.

Soviet soldiers had been told they were rescuing Czechoslovakia from an imminent anti-Communist “counter-revolution”.

The invading troops initially seemed reluctant to use force against local residents, Long wrote. “As the days passed, however, frustrated and embattled tank commanders assumed a more forceful attitude.”

Many residents began gathering in front of the Radio Prague building, where clashes left more than a dozen dead. By 8am the building had been occupied by Soviet soldiers.

“Suddenly the door to the studio flew open. In the doorway stood a soldier, his uniform covered in dust. He pointed a machine gun at me and said ‘Von!’ – which means ‘Out!’ in Russian,” recounted Cecile Koiova in a Radio Prague history.

Broadcasting at the main building was halted, but journalists continued sending out makeshift broadcasts from ancillary studios the soldiers hadn’t found.

Accounts of how many people were killed in the Warsaw Pact invasion vary widely. A previously secret Czech interior ministry report published in 1990 revealed that 82 people were killed and 300 seriously wounded in the invasion, most of them shot. Last year a team of Czech historians estimated the number of victims at 137.

The Czech leadership’s leading reformers – Dubcek and premier Oldrich Cernik along with Jozef Smrkovsky and Frantisek Kriegel – were quickly arrested and taken to Moscow. They were soon joined by president Ludvik Svoboda, deputy chairman of the government Gustav Husak and others.

After days of secret negotiations the Czech officials returned to Prague, having agreed to Soviet troops being stationed along the Czechoslovak border and reinstating censorship of the press under an agreement known as the Moscow Protocol.

Upon his return, Dubcek gave an emotional radio address in which he announced the curtailment of reforms and urged cooperation. Thus began Czechoslovakia’s period of “normalisation”, which reasserted Kremlin control and returned the country to ideological compliance.

The invasion also helped establish the Brezhnev Doctrine, the foreign policy under which Moscow assumed the authority to intervene in countries where it felt Communist rule was under threat.

On January 16, 1969, Charles University student Jan Palach immolated himself on Wenceslas Square to protest against the continuing Soviet occupation. His death three days later provided a new rallying point, unleashing another wave of demonstrations and civil disobedience against the Soviet invasion as Palach became a national hero.

Unrest erupted again in March when the Czechoslovaks beat the Soviet team in two matches at the World Ice Hockey Championships. Having lost the Kremlin’s confidence that he could contain the situation, Dubcek was forced to resign in April. Husak took over the helm of the government where he remained until December 1989, when the Velvet Revolution succeeded in overthrowing Soviet rule.

Dubcek made a return to politics that year as chairman of a new parliament, which unanimously elected former dissident and playwright Vaclav Havel as Czechoslovakia’s first post-Communist president.