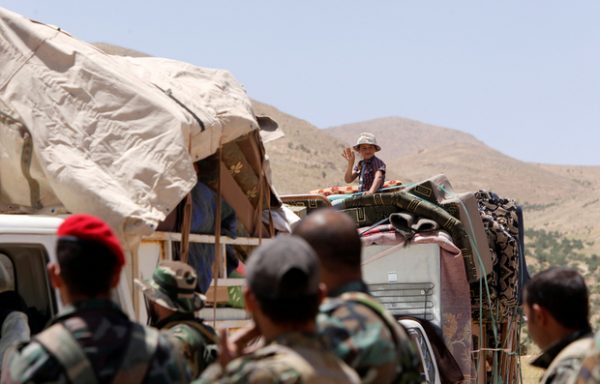 Hundreds of Syrian refugees returned to their country from Lebanon on Saturday in a bus convoy arranged by both governments, advancing an effort by Beirut to accelerate returns to areas where fighting has ended.

Syrian state television reported that about 1,200 refugees were expected to cross back into the country from Lebanon on Saturday before returning to their homes.

Lebanon’s security chief Abbas Ibrahim said “the coming period will witness the return of hundreds of thousands of refugees from Lebanon” in comments reported by Hezbollah’s al-Manar television channel.

State television in Syria and the private al-Jadeed channel in Lebanon showed buses full of refugees at the crossing point on the frontier. It is the latest in a series of recent returns arranged by the two countries.

Lebanon hosts more than a million Syrian refugees, more than a quarter of its population, and leading Lebanese politicians have said many of them should go home as Syrian President Bashar al-Assad has restored his rule across much of the country.

This week a senior official from Assad’s ally Russia was in Beirut to discuss a plan for mass returns of refugees and its defense ministry said over 1.7 million would be able to return to Syria from abroad in the near future.

The United Nations says that conditions for returns to Syria are not yet fulfilled, more than seven years into a conflict that has killed hundreds of thousands of people and driven more than half the pre-war population from their homes.