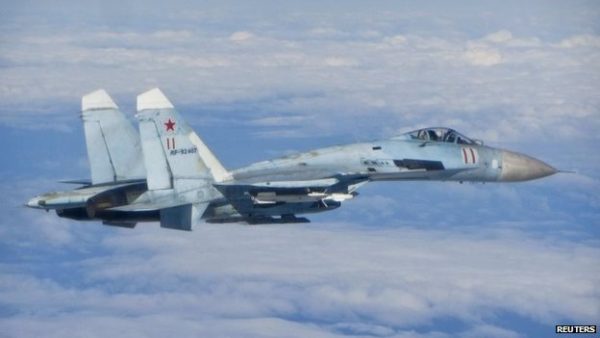 The Israeli Air Force shot down a Syrian fighter jet that traveled two kilometers into Israeli airspace on Tuesday afternoon, the military said.

“Two Patriot missiles were fired at a Syrian Sukhoi-model fighter jet,” the Israel Defense Forces said in a statement.

The IDF said the aircraft was monitored as it approached the border with the Golan Heights.

“It penetrated two kilometers into Israeli airspace and was shot down,” the army said.

According to Sky News Arabia, the plane crashed inside southwest Syria, in the Yarmouk Basin, an area still under the control of the Islamic State . It was not immediately clear if the pilots ejected before the fighter jet was shot down or what their condition was.

The official Syrian news outlet SANA confirmed that Israel had shot at one of its fighter jets, but said the plane was inside Syrian airspace at the time it was targeted.

According to SANA, Israel fired at “one of our war planes, which are leveling [terrorist] encampments in the Saida region on the outskirts of the Yarmouk Basin, in Syrian airspace.”

A military source quoted by SANA accused Israel of aiding “terrorists” in the country’s southwest, where the Syrian air force has been conducting extensive bombing raids throughout the day against a number of opposition groups in the area.

It was not immediately clear if the plane was a Sukhoi-22 or a Sukhoi-24, two different types of Russian-made fighter jets in use by the Syrian Air Force, the military said.

The IDF said it had noticed increased air force activity in southwestern Syria, near the border, since the morning.

“We have passed a number of messages, in a number of languages in order to ensure that no one violates Israeli air space,” IDF spokesperson Lt. Col. Jonathan Conricus told reporters.

Update: Unconfirmed reports say that a pilot was killed.