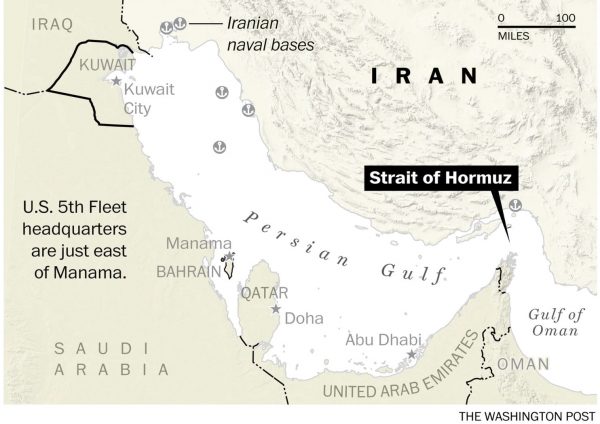 Anytime Iran and the United States trade threats, global oil markets snap to attention. The reason is the narrow stretch of water at the mouth of the Persian Gulf.

President Trump did not mention the strategic Strait of Hormuz in his late Sunday tirade against Iran, tweeting in capital letters that Iran “WILL SUFFER CONSEQUENCES THE LIKES OF WHICH FEW THROUGHOUT HISTORY HAVE EVER SUFFERED BEFORE,” in case it threatened the United States.

But Iran is often quick to remind the world of its key location along one of the world’s main oil tanker routes. On Sunday, before Trump’s threat, Iranian President Hassan Rouhani had said that any war with Iran would be “the mother of all wars.” Earlier this month, Rouhani implied that Iran has the power to severely disrupt the oil trade in the Persian Gulf, which would likely mean an attempt to blockade the Strait of Hormuz. Last weekend, Rouhani appeared to repeat his veiled threat and was quoted on his official website as saying: “Mr Trump! We are the people of dignity and guarantor of security of the waterway of the region throughout the history. Don’t play with the lion’s tail; you will regret it.”

Why is the Strait of Hormuz so crucial?

The Strait of Hormuz is one of the world’s most crucial transport routes for oil. About a third of the world’s oil tanker traffic passes through the strait, bordered by Iran and Oman. In 2016, 18.5 million barrels of petroleum were shipped through it every day, making it the world’s single most important maritime route for many nations’ oil supplies.

Theoretically, Iran could attempt to cut off the Strait of Hormuz — which connects the Persian Gulf and the Gulf of Oman — by deploying its naval vessels or laying mines, which could take months to clear. At its narrowest point, the strait’s shipping route that is accessible to the approximately 14 oil tankers that pass it every day is only two miles wide. The U.S. military has extensive footholds in the region, including the headquarters for the Navy’s 5th Fleet in Bahrain.

What would be the impact if Iran blocked the Strait of Hormuz?

If that route were inaccessible, the world’s supply in shipped daily global oil exports would suddenly drop by more than 30 percent, experts predict. Overall oil supplies would drop by about 20 percent.

Some of the oil may be rerouted via pipelines that have been expanded over fears of an Iranian-Western clash, but those are still limited in capacity and more expensive.

As a result, oil prices would immediately spike, as Arab oil suppliers would lose their market access either entirely or to a large extent. (In fact, even the veiled threat last weekend temporarily pushed up oil prices by about $1 per barrel on Monday. Price generally stabilized on Tuesday) Given the global economic repercussions, the United States and other adversaries of Iran would likely take military action. The United States would not be the only nation interested in resolving a dispute as quickly as possible, however, as the fast majority of supplies are delivered to Asian markets, in particular to Japan, India and China.

Has Iran made similar threats before?

In 2016, Iranian naval vessels veered close to American warships in the Strait of Hormuz. “These are incidents that carry a risk of escalation, and we don’t desire any kind of escalation,” Pentagon spokesman Peter Cook said at the time.

Iran’s threats have resulted in large-scale Western exercises in the region, with the United States readying itself for mine-clearance missions or combat situations.

How likely is an escalation of tensions?

“Risk is on the rise. Neither side wants war,” Cliff Kupchan, chairman of the political-risk firm Eurasia Group, wrote in a commentary on Monday. For now, the biggest risk most likely lies in a provocative maneuver gone wrong, which could result in a real conflict this time.

Rick NoackRick Noack is a foreign affairs reporter who covers Europe and international security issues from The Washington Post’s Berlin bureau. Previously, he worked for The Post from Washington as an Arthur F. Burns Fellow and from London.