Aoun under fire over naturalization of 375 foreigners 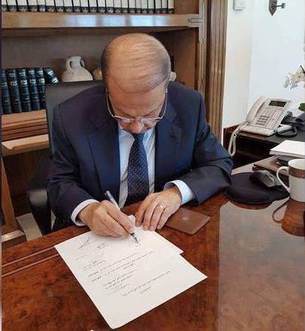 The granting of Lebanese citizenship to 375 foreigners  on the basis of  a controversial decree sent ripples across Lebanon Friday after news emerged that President Michel Aoun signed the resolution along with Prime Minister-designate Saad Hariri and caretaker Interior Minister Nouhad Mashnouq.

The decree, which was riddled with accusations of bribery, grants Lebanese citizenship to affluent applicants including Syrians, Palestinians and GCC nationals as well as businessmen from the Americas and Europe.

It remains unclear whether the decree, which has yet to be published, was signed before or after the recent parliamentary elections when the Cabinet automatically enters the caretaker period, thus casting doubt over its constitutionality.

Aoun’s office has yet to comment on the matter, with sources telling Annahar that the decree might have been drafted before the May 6 elections while the Cabinet was still fully operational. Both Hariri and Mashnouq have also refrained from commenting up to this point.

The Lebanese Forces party, which saw their parliamentary bloc increase from 8 to 15 MPs in the last elections, vowed to appeal the decree with the Constitutional Council; a position echoed by Progressive Socialist Party leader Walid Jumblatt’s Parliamentary bloc.

Kataeb MP Nadim Gemayel vowed that his party would challenge the resolution, saying that he would file an appeal with the Constitutional Council to have it overturned. “Lebanon’s citizenship is not up for sale,” he said.

Fellow party member Elias Hankache criticized what he perceives as a “systematic campaign” to naturalize refugees, saying that “there seems to be a methodical framework in place with Article 49 of the state budget, Syria’s new property law, and now the naturalization decree.”

Earlier this month, the Kataeb party spearheaded a campaign to overturn Article 49 of the 2018 state budget, which stipulated that any foreigner purchasing a property worth at least $300,000 would be granted residency status.

After successfully garnering the signatures of ten MPs, Lebanon’s Constitutional Council struck down Article 49 as opponents argued that it would pave the way for collective naturalization.

MP Boutros Harb similarly blasted Aoun’s move, arguing that it “it is unacceptable for this naturalization decree to pass without accountability,” while calling on the “judiciary to revoke it.”

Naturalization has been a widely contested topic ever since the conclusion of the Lebanese civil war, mainly due to its implications on the country’s delicate sectarian demographic balance. A naturalization decree that granted citizenship to tens of thousands of foreigners, mostly Muslims, in the 90’s under then-President Elias Hrawi and Hariri’s late father Prime Minister Rafik Hariri, had drawn sharp criticism from major Christian parties. Proponents of the decree argued that the Syrian regime, which had military forces deployed in Lebanon at the time, pushed for the decree to alter the country’s demographic balance.

Of the 375 applicants granted citizenship under the latest decree, 260 are Christians while 115 are Muslims.

According to the most recent reports President Aoun  signed the controversial decree one day before the government assumed its   caretaker role.

The  Syrians who were granted the Lebanese citizenship   are reportedly close  to Syrian President Bashar Assad and are also subject to US financial sanctions.

Minister of Education in the caretaker government Marwan Hamadeh accused President Michel Aoun of conspiring with the Syrian regime.

Some information and photos posted on Twitter revealed that those who were granted Lebanese nationality include Farouk al-Joud, vice president of the Chamber of Commerce and Industry in Lattakia. He is the owner of the largest fleet of  Syrian ships and is close to the Syrian regime.

The family of former Syrian Minister Hani Murtada, Samer Fawz, who is very close to Maher al-Assad and Iyad Ghazal, former governor of Homs, have also been included in the decree.