US team in NKorea planning Trump’s summit with Kim, report 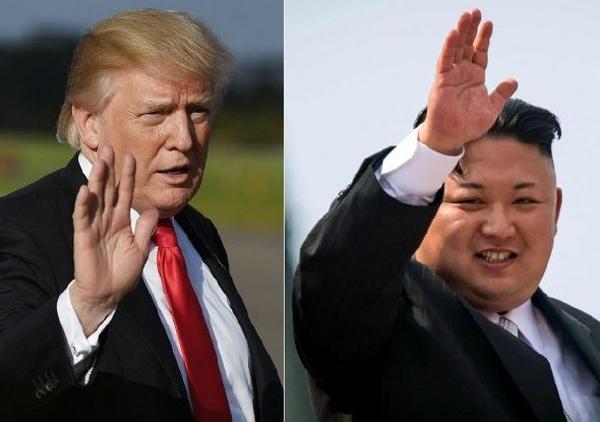 The State Department said earlier that a team was in Panmunjom, which straddles the border inside the demilitarized zone, or DMZ, separating the North and South Korea. One can cross the border simply by stepping across a painted line, but moving beyond several footsteps into the North at Panmunjom would be rare for U.S. officials.

Trump withdrew from a planned June 12 Singapore summit with Kim last Thursday, but quickly announced that it could get back on track. His tweet Sunday afternoon, which offered praise for the longtime U.S. adversary, was the latest signal that his concerns about the North’s stance toward the summit had been allayed.

“Our United States team has arrived in North Korea to make arrangements for the Summit between Kim Jong Un and myself,” he tweeted. “I truly believe North Korea has brilliant potential and will be a great economic and financial Nation one day. Kim Jong Un agrees with me on this. It will happen!”

South Korea’s president, Moon Jae-in, gave details about his surprise meeting Saturday with Kim in the Panmunjom truce village, saying Kim had committed to sitting down with Trump and to a “complete denuclearization of the Korean Peninsula.”

U.S. Secretary of State Mike Pompeo tapped veteran American diplomat Sung Kim to handle pre-summit negotiations. On a separate but complementary track was the CIA team Pompeo set up last year when he headed the spy agency. And on a third track was a White House logistical group sent to Singapore on Sunday to prepare in case the summit takes place. It was led by Joe Hagin, White House deputy chief of staff for operations.

Kim, the U.S. ambassador to the Philippines, also served as ambassador to South Korea and was part of the U.S. negotiating team that last held substantive denuclearization talks with North Korea during the George W. Bush administration in 2005.

The Korean leaders’ second summit in a month saw bear hugs and broad smiles. But their quickly arranged meeting Saturday appeared to highlight a sense of urgency on both sides of the world’s most heavily armed border.

The talks, which Moon said Kim Jong Un requested, capped a whirlwind 24 hours of diplomatic back and forth. They allowed Moon to push for a U.S.-North Korean summit that he sees as the best way to ease animosity that had some fearing a war last year.

Kim may see a meeting with Trump as necessary to easing pressure from crushing sanctions and to winning security assurances in a region surrounded by enemies.

Moon told reporters that Kim “again made clear his commitment to a complete denuclearization of the Korean Peninsula.” Moon added that Kim said he’s willing to cooperate to end confrontation and work toward peace for the sake of the successful summit with Trump.

“What Kim is unclear about is that he has concerns about whether his country can surely trust the United States over its promise to end hostile relations (with North Korea) and provide a security guarantee if they do denuclearization,” Moon said.

“During the South Korea-U.S. summit, President Trump said the U.S. is willing to clearly put an end to hostile relations (between the U.S. and North Korea) and help (the North) achieve economic prosperity if North Korea conducts denuclearization,” he said.

Kim, in a dispatch issued by the North’s state-run news service earlier Sunday, “expressed his fixed will on the historic (North Korea)-U.S. summit talks.” During Saturday’s inter-Korean summit, the Korean leaders agreed to “positively cooperate with each other as ever to improve (North Korea)-U.S. relations and establish (a) mechanism for permanent and durable peace.”

They agreed to have their top officials meet again June 1. Moon said military generals and Red Cross officials from the Koreas will also meet separately to discuss how to ease military tensions and resume reunions of families separated by the 1950-53 Korean War.

Despite repeated references to “denuclearization of the Korean Peninsula” by the North, it remains unclear whether Kim will ever agree to fully abandon his nuclear arsenal.

The North has previously used the term to demand the United States pull out its 28,500 troops in South Korea and withdraw its so-called nuclear umbrella security commitment to South Korea and Japan. The North hasn’t openly repeated those same demands after Kim’s sudden outreach to Seoul and Washington.

Moon has insisted Kim can be persuaded to abandon his nuclear facilities, materials and bombs in a verifiable and irreversible way in exchange for credible security and economic guarantees. Moon said Sunday that the North’s disarmament could still be a difficult process even if Pyongyang, Washington and Seoul don’t differ over what “complete denuclearization” of the peninsula means.

Before he canceled the summit, Trump did not rule out an incremental approach that would provide incentives along the way to the North.

Following an unusually provocative 2017 in which Kim’s engineers tested a purported thermonuclear warhead and three long-range missiles theoretically capable of striking mainland U.S. cities, the North Korean leader has engaged in a flurry of diplomatic activity in recent months. He has had the summits with Moon and Chinese leader Xi Jinping, as well as two meetings with Pompeo.