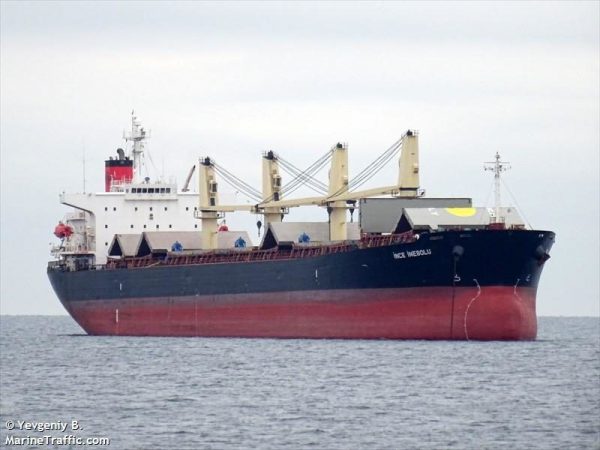 A Turkish vessel carrying wheat to Yemen this month was hit by a rocket or missile and more attacks on merchant ships are likely due to a spillover of the conflict, a senior European naval official said on Wednesday.

The Turkish flagged Ince Inebolu bulk carrier was damaged by an explosion on May 10, some 70 miles off the Red Sea port of Salif where it was due to deliver a 50,000 tonne cargo of Russian wheat.

“The assessment at the moment is it was almost certainly non-state Yemen based actors firing a land-based missile or rocket at the vessel,” Major Tom Mobbs, head of intelligence and security with the European Union’s counter piracy mission EU Navfor, told Reuters.

“It has sharpened the focus in our mind with this happening.”

Saudi Arabia, the United Arab Emirates and Sunni Muslim allies have been fighting in Yemen for three years against the Houthis, a Shi’ite group that controls much of North Yemen including the capital Sanaa, and drove a Saudi-backed government into exile in 2014.

The Houthis, who are aligned with the Middle East’s pre-eminent Shi’ite power Iran, have fired missiles into Saudi Arabia. The Saudi-led coalition has carried out a campaign of thousands of airstrikes and restricted imports into Yemen, worsening what the United Nations says is potentially the world’s worst humanitarian crisis.

Mobbs declined to comment on whether the attack on the Turkish ship was carried out by Houthis, adding “that is the natural speculation”.

The ship’s owner Ince Shipping Group said in an emailed statement to Reuters that the vessel had been “hit by an unidentified missile while she was waiting for coalition forces” to give clearance to proceed to the port.

“Clearly the events show the risk of misidentification and collateral damage,” he said in the sidelines of the launch of a report by the non-profit group Oceans Beyond Piracy.

The Saudi-led coalition says one of the main justifications for its intervention is to protect shipping routes through the narrow Bab al-Mandab waterway, which connects the Red Sea with the Gulf of Aden and the Arabian Sea, through which nearly 4 million barrels of oil are shipped daily to Europe, the United states and Asia plus commercial goods.

Saudi and Emirati state media said on Wednesday that the Saudi-led coalition had foiled attacks in the Red Sea by explosives-laden speedboats deployed by Houthis against commercial vessels, including an oil tanker.

Last month, a Saudi oil tanker was hit off Yemen’s main port city of Hodeidah, suffering limited damage, in what coalition forces said was an attack by the Houthis. The Houthis said they had targeted a coalition warship.

The worsening situation prompted the international shipping industry in January to issue guidance to mariners of the multiple threats including missiles, sea mines and water-borne improvised explosives devices.

“The same set of circumstances that are prompting these attacks are unlikely to go away, certainly in the near future. So, the attacks will continue,” Mobbs said.