Turkey halts lira’s free fall. Has fallen 20 % so far this year against the dollar 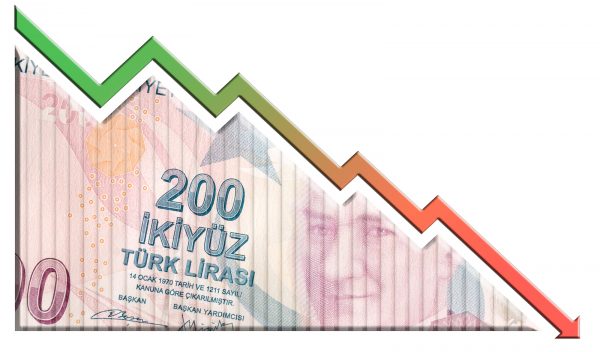 Turkey’s central bank intervened to halt the free fall of the Turkish lira on Wednesday, but it isn’t clear whether policy makers will be able to stave off a full-fledged currency crisis.

The Central Bank of the Republic of Turkey raised its late liquidity window lending rate by 300 basis points (http://www.marketwatch.com/story/turkish-central-bank-hikes-lending-rate-halts-lira-drop-2018-05-23) on Wednesday, in a surprise move that put a halt to the lira selloff — at least for now. The lending rate now sits at 16.5%, compared with 13.5% before.

The U.S. dollar had rallied to a historic high against Turkey’s lira on Wednesday, buying 4.9233 lira at the high, before the path reversed on the back of the CBRT’s action and the lira found its feet again. The buck last bought 4.7015 lira. In the year to date, the Turkish currency has dropped more than 20% against the dollar, according to FactSet data.

The euro-lira pair behaved similarly, first rallying to an all-time high but paring the rise after the rate increase. The euro last bought 5.5084 lira. The U.S. and eurozone are two of Turkey’s most important trading partners.

The central bank has been operating in a peculiar environment given that Turkey’s inflation has been hitting double digits and its currency keeps sliding to historic lows. Moreover, the government of President Recep Tayyip Erdogan has been critical of the central bank, calling for lower interest rates.

Just last week, Erdogan, who is expected to win re-election to a five-year term in a snap election called for June 24, said he was looking to take more control of monetary policy during his next term. His comments led market participants to believe the independence of the central bank was in jeopardy, and ratings agency Fitch wrote (https://www.fitchratings.com/site/pr/10031544) that a “greater erosion of monetary policy independence would put further pressure on Turkey’s sovereign credit profile.”

While Wednesday’s CBRT action was both aggressive and in line with its goal of reducing inflation to single digits, it could be enough “to clear lira shorts and consolidate dollar-lira around 4.40/4.50, a level that we would have considered of extreme lira weakness only three weeks ago,” wrote Christian Maggio, head of emerging markets strategy at TD Securities.

Indeed, there is more to the lira’s weakness. Turkey’s large current-account deficit and its reliance on foreign — especially dollar-denominated — funding make the country vulnerable in the environment of monetary policy normalization. Rising rates in the U.S. mean a higher price tag on Turkey’s debt burden. And the strong dollar, which has been pushed higher on the back of rising Treasury yields as well as supportive economic data, also doesn’t help.

The selloff that has ravaged emerging markets currencies since the beginning of the quarter has hit Turkey, along with Argentina which is facing a currency crisis of its own (http://www.marketwatch.com/story/argentina-may-be-headed-for-another-currency-crisis-2018-05-07), the hardest.

“In spite of today’s hike, we still see around a one-in-three chance that the CBRT is forced to hike further before their next official meeting on June 7,” Maggio said.

Should the lira really stabilize over the next weeks, the central bank would more likely taut its hawkish message to avoid raising rates again, in part due to the political opposition to higher rates.

“This would imply an ongoing fragility of the currency market sentiment,” Maggio said.