Geagea eyes Hezbollah and reform after his big election win 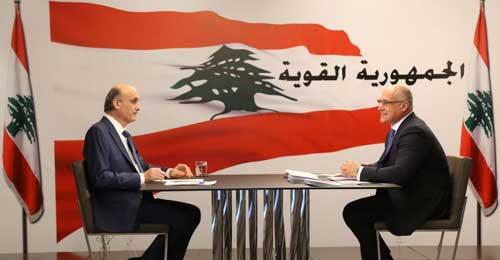 A Christian party that made big gains in Lebanon’s general election says it will use its stronger position to press for Hezbollah’s weapons to be brought under government control and to root out corruption in the heavily indebted state.

The Lebanese Forces (LF) party, which almost doubled its number of MPs in the May 6 election, expects to convert those gains into more power in a new coalition government that Western-backed Prime Minister Saad al-Hariri is expected to lead, LF leader Samir Geagea told Reuters in an interview.

Geagea said it would “no doubt” be difficult to form the new government which – like the outgoing one – will share out ministries among Lebanon’s rival parties, including the heavily armed, Iran-backed Hezbollah.

But citing intentions expressed by Lebanese leaders and the pressing need for economic reform, Geagea held out hope the cabinet formation would not take too long. He confirmed his party was moving towards nominating Hariri as premier again.

Lebanon was in dire need of a “truly new” government to tackle corruption, he said.

“I believe everyone has realized now that the ship might sink with everyone aboard,” said Geagea, referring to the economic risks facing the state with the world’s third highest debt as a share of output. “I believe we are in a new phase.”

The LF is the second biggest Christian party after the Free Patriotic Movement (FPM) established by President Michel Aoun, a Hezbollah ally who became head of state in 2016.

While Aoun has expressed support for Hezbollah’s possession of weapons as a deterrent to Israel, Geagea is the Shi’ite group’s most significant Christian adversary in Lebanon and an opponent of its allies in Damascus and Tehran.

Hezbollah also emerged a big winner from the election thanks to gains by allies who won seats at Hariri’s expense.

Including the FPM, Hezbollah and factions that back its possession of arms won more than 70 of parliament’s 128 seats, a reversal from 2009 when anti-Hezbollah groups led by Hariri won a majority. Hezbollah has declared the result a victory.

Hariri was always expected to lose out under a new proportional system but fared worse than officials in his party feared by losing more than a third of his seats. Yet he remains the leading Sunni figure in Lebanon’s sectarian system.

Geagea, however, disputed that Hezbollah had come out stronger, saying the FPM was no real ally of the group and its backing for its weapons was “just verbal”.

The LF, which won 15 seats, emerged from a Christian militia led by Geagea through the final phase of the 1975-90 civil war.

Hezbollah, set up by Iran’s Revolutionary Guards, was the only Lebanese group to keep its weapons at the end of the war. It used them to fight Israeli troops occupying southern Lebanon.

Since Israel withdrew in 2000, the arms have been a point of contention. The group, which is deemed a terrorist organization by the United States, is more powerful than the state and has grown militarily stronger since joining the Syrian war in 2012.

Noting that Hezbollah was part of the cabinet, Geagea said his party would propose – as a temporary measure – that its arsenal be put at the command of the government.

“If we accept, for the sake of argument, that Hezbollah’s weapons stay where they are temporarily … why shouldn’t the decision on their use be the Lebanese government’s?” he said.

“We will push with all our strength (towards this goal) though at the same time I see little hope in achieving anything because Hezbollah’s position on this issue is almost ideological,” he said.

He said the issue must be addressed through negotiations, adding: “No escalation, stability is a red line.”

Geagea expressed concern about tensions in the wider region, where Hezbollah has been a big player in the power struggle between Shi’ite Iran on the one hand and Sunni-led Gulf Arab states that are allied to the United States on the other.

“The least I can say is that the region is going towards more escalation and complication. Will it reach a comprehensive war, or remain as it is at present? I don’t know,” Geagea said.

Lebanon has been spared the worst of the instability that has swept through the Arab world since 2011, though the Syrian war has exacerbated long-standing rivalries and contributed to years of paralysis in government. This has weighed on the economy of a country hosting some 1 million Syrian refugees, or one in four of its population.

Growth has stagnated while levels of government debt have climbed, moving above 150 percent of GDP at the end of 2017. The IMF in February said fiscal policy must be “immediately anchored” in a plan to stabilize and reduce debt levels.

Geagea said wiping out corruption in government was the most important step towards fixing Lebanon’s finances. Reforming the heavily subsidized power sector alone would save the treasury $1.5 billion a year, he said. Another $1 billion could be saved through tackling waste and corruption elsewhere in the state.

“I fear that if the situation continues as it is – financially and economically – matters will worsen,” he said.