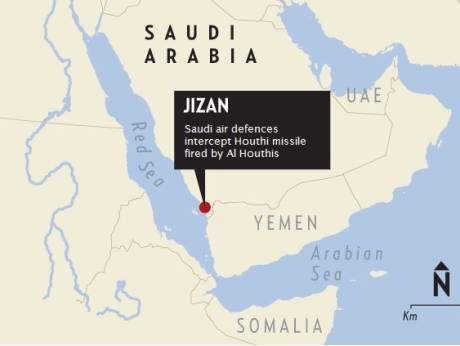 Saudi Arabia on Saturday intercepted four ballistic missiles fired by Yemeni rebels, the Saudi-led coalition against the insurgents said, the latest in a string of such attacks against the kingdom.

The missiles were headed towards the city of Jizan in southern Saudi Arabia, according to a coalition statement. No casualties were reported.

The Huthi rebels’ Al Masirah television said Saturday they had fired eight missiles towards Jizan, a day after Saudi defence forces said they had downed a missile headed for the same area.

The latest attack came as the Huthis staged a public funeral for a slain commander in the Yemeni capital Sanaa.

Saleh al-Sammad, head of the rebels’ supreme political council, was killed in an air raid by Saudi Arabia and its allies last week.

Saudi Arabia formed its military coalition in 2015 to battle the Huthi rebels in its southern neighbour and restore the internationally recognised Yemeni government to power.

The Huthis control Yemen’s capital, Sanaa, as well as much of Yemen’s north and the key Hodeida port on the country’s western coastline.

Nearly 10,000 people have been killed since the Saudi-led alliance joined the Yemen conflict, triggering what the United Nations has called the world’s worst humanitarian crisis.

The alliance imposed a total blockade on Yemen’s ports in November in retaliation for the rebel missile attacks.

The blockade has since been partially lifted, but access remains limited and the impoverished country stands on the brink of famine.

A Saudi-led coalition air strike has killed dozens of Yemeni insurgents including two commanders, state media said Saturday, in another blow to the rebels following the assassination of their political chief.

Yemen’s Houthi rebels on Saturday staged a public funeral for Saleh al-Sammad, head of their Supreme Political Council and effectively the insurgents’ second-in-command, who was killed last week in an air raid claimed by Saudi Arabia and its allies.

His funeral came hours after Saudi Arabia’s state-run Al-Ekhbariya television said two high-ranking insurgents were among more than 50 Houthis killed in a new strike overnight in the capital Sanaa.

The rebels have been locked in a war since 2015 with a Saudi-led military alliance fighting to restore the internationally-recognised Yemeni government to power.

Saudi-owned Al-Arabiya television said the strike had targeted the interior ministry in Sanaa, which is controlled by the rebels.

The Houthis, backed by Saudi Arabia’s regional arch-rival Iran, confirmed an overnight air strike on Sanaa but gave no details.

The rebels, who hail from northern Yemen, control Sanaa and much of the country’s north which borders Saudi Arabia and the key Hodeida port on the Red Sea coast.