Lebanese expatriates living in six Arab countries – Egypt, Oman, the United Arab Emirates, Saudi Arabia, Qatar and Kuwait – cast their ballots on Friday, while the rest of the diaspora will vote on Sunday.
President Michel Aoun made an unannounced visit to the Foreign ministry in Ashrafieh and was seen touring the monitoring centers.

In brief remarks, Aoun said it was “no small matter” that Lebanon was holding expatriate voting in “more than 40 countries,” as he congratulated and thanked those who had helped make the expat vote possible.

Giant screens were set up in the main hall of the ministry, broadcasting live from each of the 32 polling stations in the six countries. The latest technologies and software were used to provide up-to-the-minute figures and participation rates that were instantly delivered to local and international monitors and media personnel who gathered in a large operations room at the ministry. 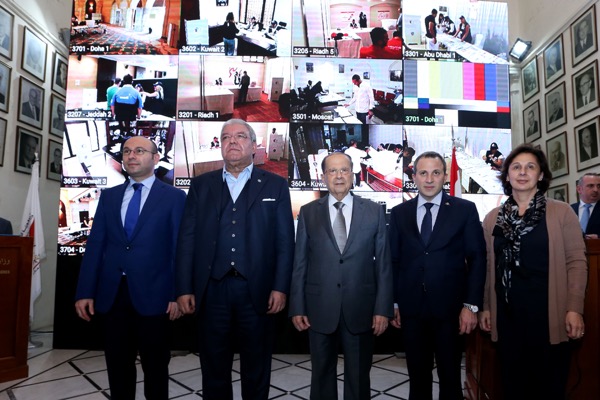 Members from the Electoral Supervisory Committee as well as EU observers and monitors from the Lebanese Association for Democratic Elections and other NGOs were also present at the ministry from 6 a.m.

Ministry officials repeatedly expressed their satisfaction regarding the progress of the electoral process, especially since no technical faults were reported . “To all those who bet that we were unable to accomplish [expat voting], this is a proof that we can do it when we want to and connect with all Lebanese across the world,” Foreign Minister Gebran Bassil said.

“With $40,000, we were able to finalize the registration [of Lebanese expats to vote] and with $100,000 we connected the world with Lebanon,” he said, in reference to the technical and online facilities obtained for the purpose of the elections.

Bassil said he was “very proud to witness on the screen at the Foreign Ministry the first [expat] voting in Lebanon’s history.”

Interior Minister Nouhad Machnouk, whose ministry is tasked with implementing the elections, also spent time at the ministry during the vote. He told reporters that the Electoral Supervisory Committee was overseeing the electoral process and that no complaints had been registered Friday concerning the expat vote.

Lebanese Association for Democratic Elections (LADE) an independent civil-society and nonprofit organization focusing on ensuring democratic electoral processes said it had recorded violations in the voting process abroad. It claimed that a name was added to a voter registry list by hand , but Foreign Ministry General-Secretary Hani Chemaitelly denied LADE’s statement describing it as “a lie and false.”

Al-Jadeed TV reported another alleged violation, echoed by LADE, in which envelopes containing ballots had not been sealed, but Chemaitelly said that this was a normal measure. “They are not sealed because when sorting the votes, if you have to rip open the envelope, the vote itself could be ripped, making it invalid,” he said.

“If someone wants to accuse us, they should consider [their charge] 100 times before doing so, because [we are being as transparent as possible].”

“We are very proud of what we have accomplished in this very short period of time,” Chemaitelly was quoted as saying . “That was a big challenge for us and we are more than pleased with the outcome.”

Other newspapers  reported that political sources following up closely on the elections, listed some other  complaints saying names of some Lebanese who have registered to take part in the electoral process “were not included on the voters lists, and some were written by hand contrary to the law.”

The sources also alleged that some voters “of specific political orientation” were “intimidated.”

“More than 30 Lebanese nationals descending from an unspecified area in South Lebanon were prevented from casting their votes. They were told their names are blacklisted,” the sources were quoted as saying

These reports have raised “condemnation” of some circles, who said “it would put the elections results in a circle of suspicion.”

The Lebanese ambassador to the Emirates told LBCI that they were informed DHL, the courier company tasked with delivering ballot boxes from abroad to Beirut, does not work Friday. “Therefore the transfer of the ballot boxes from Dubai and Abu Dhabi [will take place] Saturday between 8 and 10 p.m. to Lebanon,” he was quoted as saying.

Once in Beirut, the votes will be secured at the Central Bank after being sorted into electoral districts, and sent to the respective districts for counting on May 6.

Lebanese expatriates in Europe, Australia, the Americas and Africa will be voting on Sunday

The total number of registered expat voters reaching 82,970, a very small number when compared to the 3.7 million eligible voters inside Lebanon. specially since thee are more than twice as many Lebanese living abroad