Trump and Putin on collision course in Syria 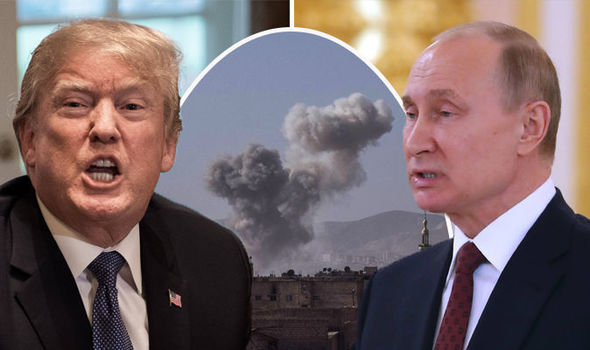 On a day when Trump tweeted a vow to attack Syrian government forces—mocking a Russian threat of retaliation—experts and former U.S. officials warned that Washington and Moscow could stumble into a dangerous clash.

“Putin will see this as a test of wills, given Trump’s tweet, no doubt about it,” said Michael Carpenter, a former top official for Russia at the Obama national security council and Pentagon.

The rising hostilities are an unexpected turn some 18 months after Trump warned that his 2016 campaign rival, Hillary Clinton, favored a tough stance towards Russia in Syria that could “lead to World War III.” As a candidate, Trump repeatedly said that the U.S. and Russia could work together in Syria, where Assad has been fighting a seven-year civil war with Russian military support.

“Get ready Russia,” Trump tweeted Wednesday morning, added that missiles “will be coming, nice and new and ‘smart! You shouldn’t be partners with a Gas Killing Animal who kills his people and enjoys it!”

Trump also declared that the U.S.-Russian relationship is now “worse now than it has ever been, and that includes the Cold War.”

Still, Trump refrained from specifically naming Putin, with whom he has repeatedly said he hopes to “get along.” And the Russian president himself avoidedescalating the rhetoric in Moscow on Wednesday, obliquely saying only that “the situation in the world is becoming more chaotic” but that “we still hope that common sense will eventually prevail and international relations will enter a constructive course.”

Carpenter said that “the Russians will be prudent in how they select their response” to any U.S. action in Syria, predicting that they would use electronic warfare capabilities and sophisticated S-400 anti-air missile systems to try and shoot down the cruise missiles the U.S. is likely to use in an attack.

“I would expect Russia to try hard to shoot down cruise missiles and claim this as a victory,” added Alexander Bick, a former national security council official overseeing Syria in the Obama White House. “I would also expect an intensified diplomatic effort to portray the US presence in Syria as illegal, and possibly more aggressive tactics to try to deny U.S. aircraft access to Syrian airspace,” Bick added.

U.S. officials and experts warn that events could take an even more dangerous turn if American missiles should kill any of the Russian soldiers who are assisting Syrian President Bashar Assad’s forces in the country. Russians are likely present at most key military targets inside of Syria, according to a former senior Obama administration Pentagon official.

Well before the current crisis, Trump’s new national security adviser, John Bolton, warned in a June Wall Street Journal op-ed that “the probability of direct military confrontation between the U.S. and Russia has risen” in Syria. Bolton went on to argue that the U.S. must challenge Russian influence in the country.

Trump officials are debating a military response to a recent chemical weapons attack in the Damascus suburb of Douma which the U.S. attributes to Assad’s government. Russia is allied with Assad and fervently opposes U.S. action against his forces, and was furious after Trump fired missiles at Syrian airbase last April to punish another chemical attack.

A commentary and video posted on the Kremlin-funded news outlet RT Wednesday suggested that Trump was preparing to bomb Syria for political reasons.

“President Trump, once a vocal critic of US military involvement in Syria, has taken to Twitter to warn Damascus and Moscow about incoming ‘smart’ missiles. Is Trump’s slumping popularity a factor in his stunning policy reversal?” the unbylined commentary asked.

Although Trump’s words seemed to indicate that an attack on Assad’s forces is a certainty, Defense Secretary James Mattis told reporters Wednesday that the U.S. is “still assessing the intelligence” suggesting the Assad regime was behind the attack, which killed at least 42 and sickened as many as 500. Syrian and Russian officials have blamed rebel fighters for the use of what experts say appears to have been nerve gas.

The harsh talk comes amid a growing diplomatic confrontation between the U.S. and Russia, despite Trump’s continued talk of dialogue with Putin.

In late March, the U.S. expelled 60 Russian diplomats to punish the attempted killing with nerve agent of a Russian double agent living in London, which the U.S blamed on Putin’s government. Last week, the U.S. sanctioned several Russian oligarchs as punishment for Russia’s 2016 election interference, one of several recent rounds of sanctions against Moscow.

Trump also approved late last year the sale of anti-tank missiles to the government of Ukraine, which is fighting a pro-Russian separatist insurgency in its eastern region, an act that infuriated the Kremlin.

Even amid the rising tensions, Trump called Putin on March 20 and—against the advice of his advisers—congratulated the Russian leader on an election victory widely criticized as anti-democratic. Trump also invited Putin to pay his first visit to the White House since 2005.

But Trump’s rhetoric towards Russia has been hardening, and on April 8 he tweeted critically of the Russian leader’s support for Assad—the first time he had done so as president.

A retaliatory strike against Syria would be the second of Trump’s administration. A reported use of chemical weapons last year by Assad’s regime was met with 59 Tomahawk cruise missiles launched at the Syrian airfield where the attack was believed to have originated. But the airfield was soon repaired, and Trump took no further action.

The high-stakes decision about action in Syria Bolton with embarking on his first week on the job, after the ouster of his predecessor, H.R. McMaster. Compounding the chaos at the White House, deputy national security adviser Nadia Schadlow on Wednesday announced her resignation, which the White House said would be effective April 27. She is the third senior NSC official to resign in the past several days. For at least the second time this week, Vice President Mike Pence presided over a meeting of Trump’s national security advisers, Sanders said.

Russian Foreign Ministry spokeswoman Maria Zakharova responded quickly Wednesday, according to the Associated Press, writing on Facebook that a missile strike like the one Trump said is coming would destroy any evidence of a chemical weapon attack.

Experts say Trump lacks a clear strategy to address the ongoing conflict in Syria, where several nations are struggling for influence as the civil war winds down and the Islamic State, which the U.S. has been fighting since 2014, clings to a small fraction of the territory it once held there. About 2000 U.S. troops operate in the country.

Critics say he has failed to define a clear policy for Syria, from which he has recently called for a rapid withdrawal—backing off at the urging of senior military officials who note that the Islamic State has not been totally defeated and that the U.S. should contest Russian and Iranian influence in the country.

“Trump has been wildly inconsistent on this issue and his Tweets today suggest he may be driven more by emotion and ego than any coherent strategy,” said Philip Gordon, a former top Obama White House aide for Middle East issues.

At the State Department, diplomats said they are expecting military action but have low expectations that it will alter the balance of power in the country, where Assad has largely crushed the opposition to his rule.

“Assad has won. One strike won’t change that.” one State Department official said.

Some officials argue that because last year’s strike, using dozens cruise missiles, failed to deter the continued use of chemical weapons, a second strike must be more severe — potentially including the use of American warplanes, a riskier step because of the threat one could be shot down.

Trump’s Wednesday tweets seemed a response to remarks from Alexander Zasypkin, the Kremlin’s ambassador to Lebanon, who said Tuesday, according to Reuters, that “if there is a strike by the Americans, then… the missiles will be downed and even the sources from which the missiles were fired.”

Zasypkin said his comments about a U.S. missile strike echoed remarks from Russian President Vladimir Putin and the Russian military chief of staff. Other Russian officials have made similar vows in the past.

In a potential sign of the diplomatic animus, a Russian state television network canceled a scheduled interview with former U.S. Defense Secretary William Perry—who urges better dialogue between Washington and Moscow to avoid an unwanted confrontation—that had been scheduled to air on Monday. The Russian journalist who interviewed Perry wrote online that, given the crisis in Syria, “this program will sound dissonant” and that the Perry interview would air at another time.

Meanwhile, the World Affairs Council announced Tuesday, without explanation, that an event it planned to host in Washington next week with the Russian ambassador to the U.S. has also been canceled.

Some experts on the Syria conflict downplayed fears of a dangerous clash between the U.S. and Russia.

“The Russians have always tried to strong arm us in Syria and scaring us out of any meaningful action,” said Wa’el Alzayat, former State Department official who worked on Syria policy. “While there is always the possibility for miscalculation, neither the Russians nor the US want a direct confrontation.”

“World War III with the Russians is a red herring used by those who do not want the U.S. to protect civilians in Syria,” he added.

On Twitter Wednesday, Trump did reiterate on Twitter his desire to improve the U.S.-Russia relationship. “There is no reason for this. Russia needs us to help with their economy, something that would be very easy to do, and we need all nations to work together,” he wrote. “Stop the arms race?”

“Much of the bad blood with Russia is caused by the Fake & Corrupt Russia Investigation,” Trump wrote.

Last month, Putin warned that his nation was in possession of weapons capable of evading any defense system, including intercontinental missiles, underwater drones and a hypersonic weapon that “heads for its target like a meteorite.”

“Efforts to contain Russia have failed, face it,” Putin said. “Nobody listened to us. Listen now.”