Trump is now doing the same thing as Obama in Syria 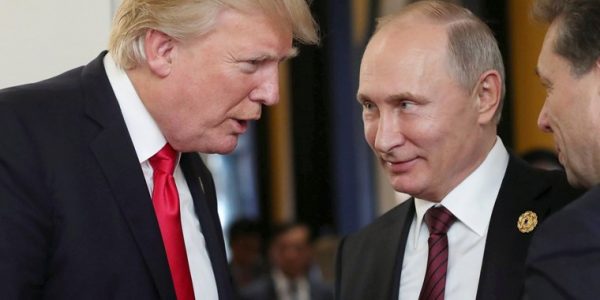 President Donald Trump’s warning on Wednesday morning that US missiles “will be coming” to Syria was notable not only for its military and geopolitical implications, but because he tipped off US plans in exactly the same manner for which he’s criticized his predecessor.

In 2013, as the Obama administration was weighing a response to the Syrian government after it violated President Barack Obama’s “red line” for its use of chemical weapons, Trump argued that the US should “stay the hell out of Syria” and criticized the administration for “broadcasting” its strategy.

Why do we keep broadcasting when we are going to attack Syria. Why can't we just be quiet and, if we attack at all, catch them by surprise?

“Why do we keep broadcasting when we are going to attack Syria. Why can’t we just be quiet and, if we attack at all, catch them by surprise?” Trump tweeted in response.
He argued that he “would not go into Syria, but if I did it would be by surprise and not blurted all over the media like fools.”
“For the first time in the history of military operations a country has broadcast what, when and where they will be doing in a future attack!” Trump also wrote back then.
Trump added, “Who are our generals that are allowing this fiasco to happen right before our eyes. Call it the ‘PLENTY OF
“In war, the elememt (sic) of surprise is sooooo important.What the hell is Obama doing,” Trump wrote, a day after Obama announced he believed the US should take military action against Syria with approval from Congress.
Since becoming President, Trump has broken his own rule of not publicly relaying US military strategy. Last month, Trump said US troops would “be coming out of Syria like very soon.”
Last year, after another deadly chemical weapons attack on civilians in Syria, Trump authorized a military strike on a Syrian government airbase.
A day before the military strike was carried out, Trump said he likes to think of himself as a “flexible person” and suggested that his attitude toward Syria and its President, Bashar al-Assad, had changed after seeing images out of Syria from the aftermath of the chemical attack.
But, he cautioned to reporters at the time, “One of the things I think you’ve noticed about me is, militarily, I don’t like to say where I’m going and what I doing.”
CNN
Share: