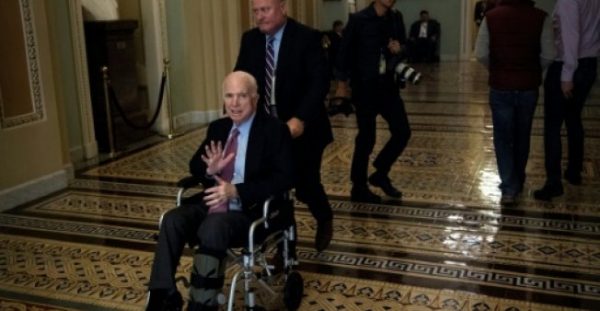 Despite being in the same party as the president, Senator John McCain — pictured on Capitol Hill in December 2017 — has been one of Donald Trump’s most forceful critics
Share:

Veteran US Senator John McCain is to deliver a “no-holds-barred” verdict on his fellow Republican Donald Trump’s presidency in a new book of memoirs, his publishers announced Monday.

Despite being in the same party as the president, McCain has been one of Trump’s most forceful critics over the last two years, both in the run-up to the 2016 election and its aftermath.

Although he has been undergoing treatment for brain cancer since last summer, McCain has continued to voice his concerns about Trump’s leadership and recently questioned the nomination of a CIA official once involved in torture to lead the spy agency.

“Candid, pragmatic and always fascinating, John McCain holds nothing back in his latest memoir” which is entitled “The Restless Wave” and will be released on May 22, according to the publishers Simon & Schuster.

The book will begin with McCain’s recollections of his unsuccessful run against Barack Obama in the 2008 election as well as his time in the Senate during his Democrat rival’s eight years in office.

He will then “share his experiences during the divisive 2016 election and his no-holds-barred opinions on the current developments coming out of Washington,” said the publishing house.

Following a barrage of criticism from McCain during the 2016 election, Trump snapped that the former Vietnamese prisoner of war was “not a war hero,” adding that “I like people who weren’t captured.”

McCain was a major thorn in the side of Trump’s first year in office and effectively sank his attempts to scrap Obama’s health care plan by voting against repeal soon after being diagnosed with cancer.

While McCain has not been seen in public for some months, his daughter Meghan said last week that she was optimistic that her father would be back in the Senate by the summer.

McCain was first elected as a senator representing the southern state of Arizona back in 1982.