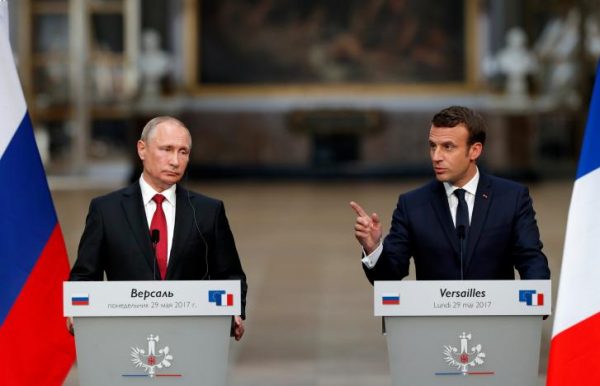 French President Emmanuel Macron (R) and Russian President Vladimir Putin (L) give a joint press conference at the Chateau de Versailles before the opening of an exhibition marking 300 years of diplomatic ties between the two countries in Versailles, France, May 29, 2017. REUTERS/Philippe Wojazer
Share:

PARIS – French President Emmanuel Macron on Friday pressed Russia’s Vladimir Putin to do all he can to ensure the Syrian government puts an end to a deteriorating humanitarian crisis in eastern Ghouta and Idlib, the Elysee Palace said in a statement.

In a telephone call, Macron told Putin it was imperative that peace talks made progress and expressed his concern over signs that chlorine bombs had been against civilians in recent weeks.

“The president stressed the need to overcome obstacles blocking negotiations and start a credible political process in the coming weeks under the auspice of the United Nations toward rebuilding peace, stability and unity in Syria,” the French presidency statement said.

Standing beside Putin in Versailles last summer, Macron said any use of chemical weapons represented a “red line” and that Paris could launch unilateral air strikes against targets in Syria if it were crossed.