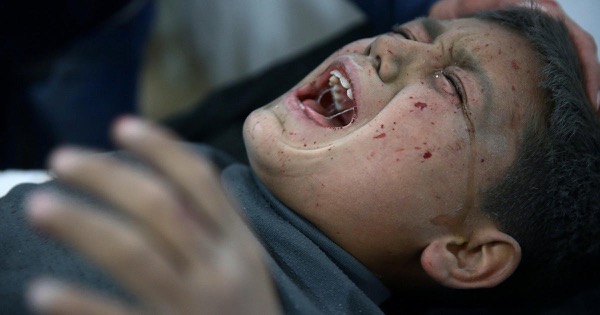 BEIRUT/PARIS  – France demanded an end to air strikes in Syria on Friday as warplanes mounted further attacks on a rebel stronghold near Damascus where a war monitor said government bombardments have killed 229 people, the deadliest week in the area since 2015.

President Bashar al-Assad, who has seized a clear advantage in the war with Russian and Iranian help, is hammering two of the last key rebel pockets of Syria – the Eastern Ghouta outside Damascus and Idlib in the northwest near the Turkish border.

The multi-sided conflict is raging on other fronts too, with Turkey waging a big offensive in a Kurdish-controlled area of northwestern Syria, the Afrin region, where Ankara is targeting Kurdish militia forces it sees as a threat to its security.

Diplomacy is making no progress toward ending a war now approaching its eighth year, having killed hundreds of thousands of people and forced half the pre-war Syrian population of 23 million from their homes, with millions forced out as refugees.

“We are very worried. The air strikes need to end,” French Defence Minister Florence Parly said on France Inter radio. “Civilians are the targets, in Idlib and in the east of Damascus. This fighting is absolutely unacceptable.”

Russia, Assad’s most powerful ally, said on Thursday a ceasefire was unrealistic. The United Nations called on Tuesday for a humanitarian truce of at least one month to allow for aid deliveries and evacuations of the wounded.

France and 1the United Nations have repeatedly called in past months for the opening of aid corridors to alleviate Syria’s humanitarian crisis. The Paris government has also urged Moscow in private to consider ways to alleviate the crisis, but those efforts have not materialized into results on the ground.

In the Eastern Ghouta, the last major rebel area near Damascus, residents described one of the most extensive bombing campaigns of the war, with multiple towns being hit simultaneously and people driven into shelters for days.

“My brother was hit yesterday in an air strike and we had to amputate his leg. Thank God it was only this,” said an Eastern Ghouta resident reached by Reuters on Friday. “He was hit by shrapnel while sitting in his home,” said the resident, who identified himself as Adnan, declining to give his full name.

“The people here have collapsed, people are seen talking to themselves in the streets. They don’t know where to go,” said Siraj Mahmoud, a spokesman with the Civil Defence rescue service in the rebel-held area. “We are living a catastrophe.”

The Syrian Observatory for Human Rights, which reports on the war using what it describes as a range of sources on all sides, said the air strikes had killed 229 people in the last four days, the Eastern Ghouta’s biggest weekly toll since 2015.

“Children in Eastern Ghouta are being starved, bombed and trapped. Schools are supposed to be safe places for children, protected under international law, yet they are being attacked every single day,” said Sonia Khush, Save the Children’s Syria Response Director in a statement.

“Children and teachers are terrified that at any moment they could be hit. The siege means there is nowhere for them to escape.”

The Syrian government has repeatedly said it targets only armed rebels and militants.

The World Food Programme, in an interview with Reuters on Thursday, reiterated the call for a cessation of hostilities to enable aid deliveries, but also noted that the Syrian government was not giving necessary permits to delivery aid.

“It has been now almost 60 days since we had the last convoy to a besieged area,” Jakob Kern, the WFP country director in Syria, told Reuters in a phone interview from Damascus.

“The frustration is two-fold. One is that we don’t get approvals to actually go but even if we got approvals, there just is too much fighting going on,” he said, pointing to hostilities in Idlib, Eastern Ghouta, Afrin and the south.

The Turkish army, which launched an air and ground offensive into Afrin on Jan. 20, said it carried out air strikes on Kurdish YPG militia targets in the Afrin region. The Observatory said the strikes killed seven combatants and two civilians.

The overnight attacks came after a lull in Turkish air strikes following the shooting down of a Russian warplane elsewhere in Syria last weekend.

The air strikes destroyed 19 targets including ammunition depots, shelters and gun positions, the Turkish armed forces said in a statement without specifying when the raids were conducted. The raids began at midnight, state-run Anadolu news agency said.

Ankara regards the YPG as a terrorist group and an extension of the Kurdistan Workers Party (PKK) that has waged a three-decade insurgency on neighboring Turkish soil.

Turkish President Tayyip Erdogan and Putin, his Russian counterpart, spoke by telephone on Thursday and agreed to strengthen military and security service coordination in Syria, according to the Kremlin.

The YPG and its allies have set up three autonomous cantons in Syria’s north, including Afrin, since the war began in 2011.