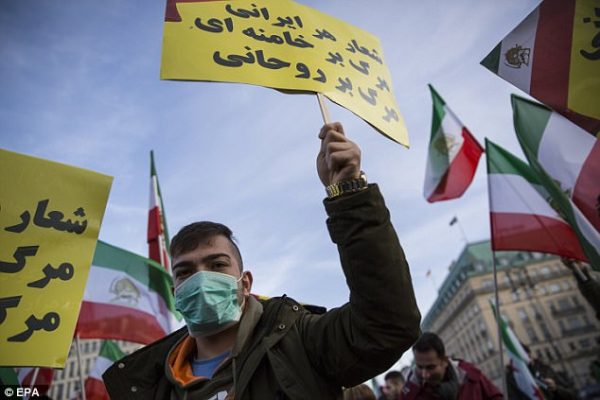 A protester with covered face holds a sign as others hold Iranian flags of the constitutional monarchy era as they protest near Brandenburg Gate in Berlin, Germany on Saturday
Share:

BY Asa Fitch and Isabel Coles

Iran’s Islamic Revolutionary Guard Corps declared Sunday that the country’s unrest of recent days has been quelled. But even as the force made the declaration, there remained signs of protest on social media.

Dozens of videos of the burning of government documents have shown up online in recent days, although they couldn’t be independently verified. The video footage showed what purported to be identification cards, or in some cases a utility bill from a state-owned company, being set aflame.

In one of the videos shared on the messaging app Telegram, women are seen burning identification cards for the Basij, a volunteer militia under the Islamic Revolutionary Guard Corps, the powerful Iranian military arm that has been training and funding fighters in foreign conflicts such as Syria and Iraq. In another, a person burns a certificate with the logo of the IRGC over a metal plate outside.

Another photo showed a man’s hand holding water and electricity bills as they burned. “We do not pay any bills,” read a caption underneath the photo on a popular antigovernment Telegram channel. “This corrupt system is doomed to end.”

Some of the documents burned, including Basij identification cards, are relatively easy to obtain.

The IRGC, a force answerable only to Supreme Leader Ayatollah Ali Khamenei, announced that the recent wave of dissent has been subdued, according to a statement reported on its official news website. The IRGC thanked the police, intelligence ministry and the Basij for ending the unrest, and blamed the U.S., Saudi Arabia, Israel and Iranian dissidents for causing it.

The IRGC has itself deployed forces to at least three provinces, its commander said last week.

The images of the burnings from Iran recall other acts of burnings official documents to protest government positions or policies.

During the Vietnam War in the 1960s, the burning of draft cards came to symbolize resistance to that conflict. The act—punishable with imprisonment—was often carried out in public at the height of the antiwar protest movement.

But in the videos shared by Iranians, the faces of those setting their documents on fire are never shown, and identifying details on documents have been removed or blacked out, making it impossible to tell if they are valid. Many of the people don’t speak, possibly out of fear that they could be identified by voice.

Calls went out on social media for additional street protests Sunday, but the intensity of the demonstrations, which began late last month, appears to have ebbed in recent days. State media reported demonstrations in support of the leadership across Iran on Sunday, the latest in a string of such gatherings—at least some of which state employees have been ordered to attend, according to unverified documents shared on social media.

It has been difficult to gauge the extent of the unrest. Authorities have placed restrictions on internet use and blocked the widely used Telegram, forcing protest organizers to find ways around the restrictions.

The protests in Iran began on Dec. 28, first in the northeastern city of Mashhad and later spreading to dozens of cities across the country both large and small.

While the upheaval initially focused on high inflation and unemployment—both are in the double-digits in Iran—it evolved into a broader critique of the Islamic governing system and of Mr. Khamenei, who has final say in matters of state. “Death to the dictator!” has been a common chant at the antigovernment rallies.

More than 20 people have died and hundreds have been arrested in the unrest, the largest since 2009, when the so-called Green Movement brought millions to the street to dispute election results that gave hard-line President Mahmoud Ahmadinejad a second term in office.

A police spokesman on Sunday said most of the “duped” people detained for their involvement in the protests had been released, but that the ringleaders remained in custody, according to the official Islamic Republic News Agency.