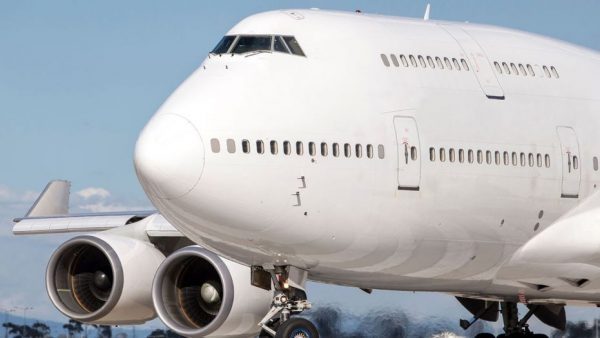 The Boeing 747, once known as “The Queen of the Skies,” will no longer fly with any U.S. carriers. (iStock)
Share:

On Wednesday, Delta Airlines flight 9771 flew from Atlanta to Pinal Airpark in Arizona. It wasn’t a full flight—just 48 people on board. But it was a milestone—and not just for the two people who got married mid-flight—for it marked the very last flight of a Boeing 747 being operated by a US airline. Delta’s last scheduled passenger service with the jumbo was actually late in December, at which point it conducted a farewell tour and then some charter flights. But as of today, after 51 long years in service, if you want to ride a 747 you’ll need to be traveling abroad.

Way back in the 1960s, when the white heat of technological progress was burning bright, it looked for a while as if supersonic air travel was going to be the next big thing. France and Britain were collaborating on a new kind of airliner that would fly at twice the speed of sound and shrink the globe. But there was just one thing they hadn’t counted on: Boeing and its gargantuan 747 jumbo jet. The double-decker airliner wouldn’t break the sound barrier, but its vast size compared to anything else in the skies helped drop the cost of long-haul air travel, opening it up to the people in a way Concorde could never hope to do.

Boeing was already having a pretty good time selling its 707 jetliner, but Pan American Airlines boss Juan Trippe wanted something special for his passengers, and he approached the aircraft manufacturer with a request for a plane that could carry twice as many passengers as its bread-and-butter long-haul model. In 1966, Trippe signed an order for 25 of the new passenger airliners. The first of these entered service in 1970, and the world would never be the same again.

Since then, more than 1,500 747s have left Boeing’s factory in Everett, Washington. Most spent their lives carrying passengers for airlines or carrying freight around the world. But some special variants have lived more exciting lives, fighting forest fires, carrying presidents—even ferrying space shuttles. The US Air Force uses a small fleet of E-4Bs as airborne doomsday control centers, and it even tried using one for ballistic missile defense, complete with a giant laser poking out its nose. More outrageous (stillborn) proposals even wanted to use 747s as mobile cruise missile launchers or as airborne aircraft carriers for little jet fighters.

The 747’s long career has seen it fly billions of miles, carrying billions of passengers, but it also had its share of tragedies. In 1977, a pair of 747s (one KLM, one Pan Am) crashed into each other on the runway at Tenerife’s airport. In 1983, the USSR shot down a Korean Air Lines 747 after mistaking it for a US spy plane. Terrorist bombs destroyed two 747s mid-flight—an Air India 747 in 1985 and a Pan Am 747 in 1988—and several more had been hijacked in the 1970s. Other disasters resulted from poor maintenance or human error. Terrible as those incidents were, they should be seen in context: 61 747s (out of 1,540) have been lost since 1970, more than half of which came without any loss of life—jumbos are estimated to have carried more than 3.5 billion passengers since 1970.

On a personal note, the 747 has been a pretty important aircraft in my life. When my family moved from South Africa to the UK in the late 1970s, it was onboard a jumbo jet. And I’m pretty sure the same is true for my move to the US back in 2002. This past summer I crossed the Atlantic in 747s twice, most memorably sitting in seat 1A on one occasion.

If this post has you hankering to spend some time airborne in a jumbo, fret not; although no US passenger carriers still operate the big bird, several hundred remain in service with other airlines, most notably British Airways and Lufthansa. And if you happen to be an oligarch or Saudi prince, Boeing will happily build you your own 747-8—but don’t expect it to be cheap!