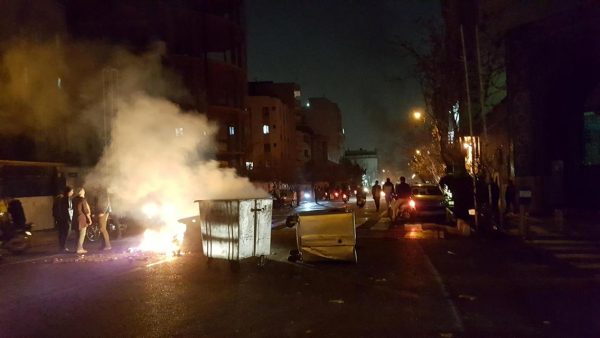 Iran warned it would come down hard on demonstrators who called for the mullahs to “leave the country alone” and even invoked the last shah, the late Reza Pahlavi.

In one of the biggest challenges to the Iranian government and clerical leadership since the 1979 revolution, tens of thousands of Iranians have protested across the country since Thursday against the Islamic Republic’s unelected clerical elite and Iranian foreign policy in the region, chanting slogans in support of political prisoners.

Speaking on state television on Sunday evening, President Hassan Rouhani said Iranians had the right to protest, but should not make the public “feel concerned about their lives and security.”

The protests began in the eastern city of Mashhad against high living costs and the struggling economy before spreading quickly to other areas and turning against the Islamic regime as a whole and beginning to call on Supreme Leader Ayatollah Ali Khamenei to step down. Videos posted on social media showed people chanting: “Mullahs, have some shame, leave the country alone.”

Interior minister Rahmani Fazli warned, “Those who damage public property, violate law and order and create unrest are responsible for their actions and should pay the price.”

The protests continued Sunday with several hundred people arrested since the first protests in Mashhad.

Two people were killed on Saturday in Dorud, a small town in Lorestan province, western Iran, and the semi-official news agency ILNA on Sunday reported police had arrested 200 people during protests in Tehran — a figure provided by Ali Asghar Nasserbakht, a security deputy governor of Tehran.

The authorities also blocked Instagram and other popular messaging apps used by activists to organise and publicise and imposed travel restrictions and a near-total media blackout.

The demonstrators also shouted, “Long live Reza Shah,” breaking a long-held taboo by invoking Iran’s last monarch, who was overthrown in the 1979 revolution that brought Ayatollah Ruhollah Khomeini to power as the first leader of the Islamic Republic. 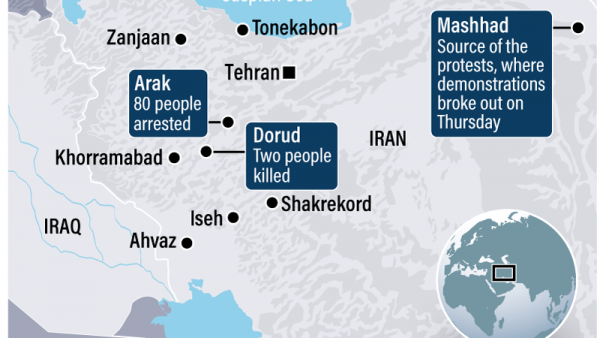 The protests are the biggest since 2009 when unrest followed the disputed re-election of the then president, Mahmoud Ahmadinejad. But the Iranian lawyer and Nobel Peace Prize winner Shirin Ebadi believes they are “the beginning of a big movement” that could spread spread more widely.

“I think the protests are not going to end soon. It seems to me that we are witnessing the beginning of a big protest movement that can go well beyond the Green wave of 2009. It would not surprise me if it becomes something bigger,” said Ms Ebadi in an interview on Sunday.

They are undoubtedly a concern for the current government of President Hassan Rouhani because he was elected on a promise to guarantee rights to freedom of expression and assembly. The president’s main achievement is a deal in 2015 with world powers that curbed Iran’s nuclear programme in return for a lifting of most international sanctions. But it has yet to bring the economic benefits the government promised.

Protesters defied the police and Revolutionary Guards who have used violence to crush previous unrest. The demonstrations could be more worrying for authorities because they appear to be spontaneous and lack a clear leader.

No political party has urged people to take to the streets and opposition leaders who galvanised Iranians during 2009 are under house arrest. In addition, the range of slogans suggests discontent across social classes with government policies.

Iran has a dual system of clerical and republican rule, in which each faction vies for control. The supreme leader rules for life and is commander-in-chief of the armed forces. He also appoints the head of the judiciary and, in all, has more power over foreign and economic policy than the elected president.

In apparent response to the protests, the government backed down on plans to raise fuel prices, promised to increase cash handouts to the poor and create more jobs in coming years. About 3.2 million Iranians are unemployed.

Government spokesman Mohammad Baqer Nobakht said “at least” 830,000 jobs are to be created in the coming year but gave no details. Iranians are also angry about their country’s costly interventions in Syria and Iraq where it is engaged in a proxy war for influence against regional rival Saudi Arabia. Videos on social media showed protesters in the city of Shiraz tearing down a banner of Qassem Soleimani, the powerful head of the Quds Force, the branch of the Iranian Revolutionary Guards’ that overseas operations in Iraq, Syria and elsewhere.

Protesters have attacked banks and government buildings and burnt police vehicles. The deputy governor of Lorestan province blamed foreign agents for the deaths of the two demonstrators in Dorud.

“No shots were fired by the police and security forces. We have found evidence of enemies of the revolution, Takfiri groups and foreign agents in this clash,” said Habibollah Khojastehpour said in an interview on state television on Sunday. Takfiri is a term for extreme Sunni militants such as ISIL.

Ahmad Khatami, a hardline cleric who leads Friday prayers in the capital Tehran, said the protests were similar to those in 2009 over alleged electoral fraud and called for capital punishment for those chanting slogans against the values of the Islamic Republic.

US president Donald Trump weighed in on the protests, saying “oppressive regimes cannot endure forever” and commenting on internet restrictions within the country.

Iran, the Number One State of Sponsored Terror with numerous violations of Human Rights occurring on an hourly basis, has now closed down the Internet so that peaceful demonstrators cannot communicate. Not good!

In one of the few other official reports, an official in Arak, around 300 kilometres southwest of Tehran, said 80 people had been arrested overnight.

“Some intended to enter and damage some government places but the attackers did not manage to achieve their goals … and the town is under control,” the unidentified official told the ILNA news agency.

Slogans such as “Death to the dictator” have been heard throughout the protests.
THE NATIONAL