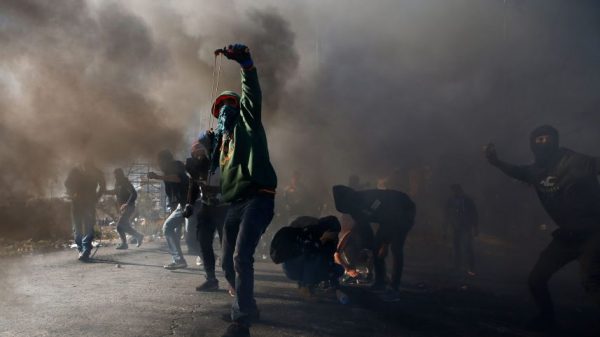 Palestinian protesters clash with Israeli troops near an Israeli checkpoint in the West Bank city of Ramallah on December 8, 2017. Abbas Momani / AFP
Share:

Britain, France, Germany, Sweden and Italy called on the USA on Friday to put forward detailed proposals for peace between Israel and the Palestinians and described as “unhelpful” President Donald Trump’s recognition of Jerusalem as Israel’s capital.

Trump’s reversal of decades of U.S. policy on Wednesday sparked a Palestinian “day of rage” on Friday. Thousands of Palestinians demonstrated, scores were hurt and at least one was killed in clashes with Israeli troops.

Amid anger in the Arab world and concern among Washington’s Western allies, the United Nations Security Council met on Friday at the request of eight of the 15 members – Britain, France, Sweden, Bolivia, Uruguay, Italy, Senegal and Egypt.

In a joint statement after the meeting, Britain, France, Germany, Sweden and Italy said the U.S. decision, which includes plans to move the U.S. embassy to Jerusalem from Tel Aviv, was “unhelpful in terms of prospects for peace in the region.”

“We stand ready to contribute to all credible efforts to restart the peace process, on the basis of internationally agreed parameters, leading to a two-State solution,” they said. “We encourage the U.S. Administration to now bring forward detailed proposals for an Israel-Palestinian settlement.”

Egypt’s U.N. Ambassador Amr Aboulatta said the U.S. decision would have “a grave, negative impact” on the peace process.

U.S. Ambassador to the United Nations Nikki Haley said that Washington has credibility as a mediator with both Israel and the Palestinians and accused the United Nations of damaging rather than advancing peace prospects with unfair attacks on Israel.

“Israel will never be, and should never be, bullied into an agreement by the United Nations, or by any collection of countries that have proven their disregard for Israel’s security,” Haley said.

Haley said Trump was committed to the peace process and that the United States had not taken a position on Jerusalem’s borders or boundaries and was not advocating any changes to the arrangements at the holy sites.

“Our actions are intended to help advance the cause of peace,” she said. “We believe we might be closer to that goal than ever before.”

Earlier on Friday, U.S. Secretary of State Rex Tillerson said during a news conference in Paris that any final decision on the status of Jerusalem would depend on negotiations between Israelis and Palestinians.

“There is a serious risk today that we may see a chain of unilateral actions, which can only push us further away from achieving our shared goal of peace,” Mladenov told the U.N. Security Council.

Israel considers all of Jerusalem to be its capital. Palestinians want the eastern part of the city as the capital of a future independent state of their own.

Most countries consider East Jerusalem, which Israel annexed after capturing it in the 1967 Middle East War, to be occupied territory, including the Old City, home to sites considered holy to Muslims, Jews and Christians alike. 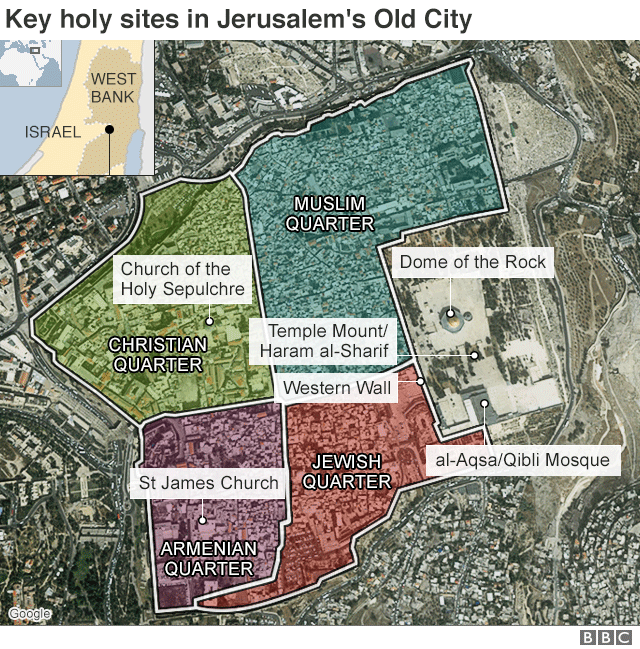 A U.N. Security Council resolution adopted in December last year “underlines that it will not recognize any changes to the 4 June 1967 lines, including with regard to Jerusalem, other than those agreed by the parties through negotiations.”

That resolution was approved with 14 votes in favor and an abstention by former U.S. President Barack Obama’s administration, which defied heavy pressure from long-time ally Israel and Trump, who was then president-elect, for Washington to wield its veto.