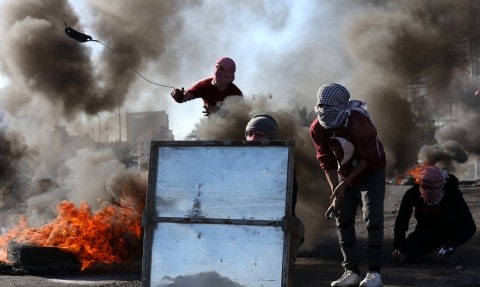 Dozens of other Palestinians were reported injured in the border clashes, which the Israeli army described as rioting.

Disturbances and demonstrations also broke out in the West Bank and Jerusalem on Friday as Palestinians protested Trump’s move, which included a pledge to relocate the U.S. Embassy from Tel Aviv to Jerusalem.

The Palestinian Health Ministry in Gaza said that 56 people were injured in the clashes there, three critically. The Israeli army confirmed that it used live fire against protesters on the Gaza border, saying soldiers “fired selectively towards two main instigators and hits were confirmed.”

There were no immediate reports of injuries among Israeli security forces.

The Israeli military said that warplanes bombed a Hamas military training compound and an ammunition warehouse in response to two rockets launched toward Israel. Neither caused injuries or damage. After the strike, a third rocket hit the Israeli city of Sderot, the military said, but a spokeswoman said she could not confirm whether it had caused any damage.

The Islamist movement Hamas in Gaza had urged its followers to ignite a third intifada, or uprising, against Israel after Trump made his announcement Wednesday. Palestinian factions in the West Bank called for three days of “rage,” and the Palestinian Authority ordered a general strike, shuttering all its public institutions.

Any perceived change to the status of the city — holy to Christians, Muslims and Jews and struggled over for millennia — is a deeply charged issue.

Demonstrators across the region also protested the U.S. decision, marching in cities in Egypt, Jordan, Turkey, Lebanon, Iraq and Iran.

The biggest turnout appeared to be in Gaza, where thousands of people gathered for street protests following Friday prayers. During those services, sermons focused on the U.S. decision to move the embassy, and preachers urged their congregants to reject any attempt to harm the sanctity of Jerusalem.

The participants chanted slogans against the U.S. recognition of Jerusalem as the capital of Israel, calling for a revolt against Israel to “liberate Jerusalem from occupation.”

Fathi Hammad, a member of the Hamas political bureau, said at a demonstration in the northern Gaza Strip: “Today we declare an uprising against the occupation, and there are no half solutions. We call upon all the free people of the world to boycott America and Israel, and we call on the Arab and Islamic countries to take a serious stand and support our people.”

Israeli police spokesman Micky Rosenfeld said units were beefed up in and around the Old City of Jerusalem ahead of Friday prayers.

However, he said there were no restrictions on Muslim worshipers entering to pray at the holy Haram al-Sharif compound, home of the renowned al-Aqsa Mosque.

At the compound, tens of thousands of worshipers filed in for the midday Friday prayers, which ended without major incident.

Some scuffles broke out between demonstrators and border police near the Austrian hospice in Jerusalem’s Old City, where demonstrators chanted slogans and threw chairs and stones.

“We usually come on Fridays, but today has special meaning,” said Noor Shaheen, 24, as she left prayers. She said the fact that Israeli authorities had not put restrictions on who could come to prayers on Friday had eased tensions, adding that Palestinians in Jerusalem were weary of protests.

“We are tired,” she said. “It’s hard make action without thinking of the reaction.”

Ahmed Aduelhawa, 60, said Palestinians in Jerusalem did not want to give Israel “an excuse to humiliate us” and that Trump’s declaration “doesn’t matter.” He said: “The future of Jerusalem isn’t in Trump’s hands, not in Abbas’s hands, not in Netanyahu’s hands, it’s in God’s hands.” He referred to Palestinian Authority President Mahmoud Abbas and Israeli Prime Minister Benjamin Netanyahu.

On Thursday, Palestinian protesters clashed with Israeli forces in Jerusalem, Ramallah and other sites in the West Bank and the Gaza Strip. In some places, demonstrators burned American flags and posters of Trump. The Palestinian Red Crescent said that more than 100 people were injured.

The United Nations Security Council is expected to meet Friday after eight countries on the 15-member body requested a briefing on the U.S. decision, which the Palestinians claim breaches U.N. resolutions and international law.

The backlash against Trump’s declaration rippled across the wider region.

After prayers on Friday, worshipers marched in the Iranian capital, Tehran, where clerics urged Palestinians to stage an uprising. Jordanian protesters took to the streets in Amman, and Turkish demonstrators rallied in Istanbul and other cities.

“Trump is not only facing the Palestinians, he is facing the resistance of the entire Arab world,” said 18-year-old Mohammed al-Asaari, a Yemeni demonstrating in Amman.

In Cairo, protesters rallied outside al-Azhar Mosque, where crowds chanted, “With blood and soul, we sacrifice for you, al-Quds!” Al-Quds is the Arabic name for Jerusalem.

Hasan Nasrallah, leader of Lebanon’s militant Shiite Hezbollah organization, spoke for almost an hour Thursday night but offered little in the way of concrete support for the Palestinians. Some in the Hezbollah-dominated Beirut suburb of Dahiyeh said the speech gave voice to a deeper frustration, and one that explained why there had not been more protests Friday.

“Why should we fight for them when they have fought us in Syria?” asked 38-year-old Mohamed Ibrahim, an accountant. Palestinians are largely Sunni, and the Shiite Hezbollah has battled Sunni rebels in Syria, in a conflict tinged with sectarianism.

Nasrallah “is not going to war with Israel over the Palestinians,” Ibrahim said. “The speech placed the responsibility for what happens next at the door of the Palestinians.”

At the Zawiat Dahmani Mosque in the Libyan capital, Tripoli, hundreds of worshipers heard the imam, Ali Gadoor, rail against Trump and his decision. He urged those gathered to wage war against Israel. But he also focused his ire on moderate Arab leaders who are key allies of the United States, referring largely to Saudi Arabia and other Persian Gulf nations.

“How come they are putting dollars in American banks,” Gadoor asked. “Why are they selling oil to the American government? They should withdraw all their dollars from the United States. They should stop selling oil. They need to support the Palestinians.”

Gadoor added that he trusts Hamas, which controls Gaza, but no longer has any faith in the Abbas government in the West Bank.

Turkey’s president predicted Thursday that the region would ignite in a “ring of fire,” while European leaders reiterated their opposition to the policy, and 86-year-old Nobel Peace laureate Desmond Tutu declared, “God is weeping.”

How long the protests will last remains unclear. Some Palestinians said they felt emboldened after a perceived victory last summer that followed two weeks of protests over metal detectors installed at al-Aqsa Mosque in Jerusalem’s Old City.

Hamas leader Ismail Haniyeh called for a new uprising in the Palestinian territories and declared Friday a day of rage.

“Tomorrow should be a day of rage and the beginning of a broad movement for an uprising that I call the intifada of freedom of Jerusalem,” he said Thursday.

He called on the Palestinian Authority to halt security coordination with Israel and “enable the resistance in the occupied West Bank to respond to this blatant aggression.”

Israel’s army said it was preparing for an increase in violence in the coming days and had increased its strength in the West Bank, reinforcing its combat intelligence and territorial defense units. Israeli police said three people were arrested Thursday in connection with “disturbances” near Damascus Gate, a main portal for Jerusalem’s Old City.

After Trump’s announcement, Abbas, the Palestinian president, said the United States could no longer be a fair mediator in the peace process between Israelis and Palestinians. He said it would galvanize the Palestinian struggle for independence.

In Israel, however, the mood was buoyant, with government ministers and pundits declaring a diplomatic victory for the Jewish state and for Netanyahu.

Netanyahu heralded Trump’s recognition of Jerusalem as a “historic statement,” and in a video published on his Facebook page, he likened Trump to British Foreign Secretary Lord Balfour, whose declaration 100 years ago led the way to the creation of Israel.

“President Trump has always linked himself to the history of our capital,” he said. “His name will now float along with other names in the context of the glorious history of Jerusalem and our people.”