Deadly clashes over Trump’s Jerusalem move, which was widely condemned 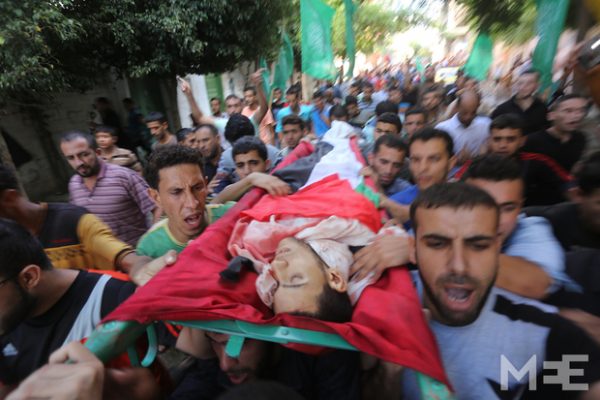 Families mourn Palestinian activist killed by Israeli security services. At least six Palestinians were killed and over 137 injured when large-scale clashes broke out in the Gaza Strip, and two Palestinians were killed in the occupied West Bank, including one after an alleged stabbing attack, sources said on Friday. (Mohammed Asad/MEE) At least one protester was killed in Gaza on Friday, the Palestinian health ministry said, during a day of demonstrations against US President Donald Trump’s widely criticised recognition of Jerusalem as the Israeli capital.
Share:

At least one protester was killed in Gaza on Friday, the Palestinian health ministry said, during a day of demonstrations against US President Donald Trump’s widely criticised recognition of Jerusalem as the Israeli capital.

Palestinians clashed with Israeli security forces on Friday after calls for a “day of rage” as US President Donald Trump’s declaration of Jerusalem as Israel’s capital sent shockwaves through the region for a second day.

Diplomatic fallout from the deeply controversial declaration also continued, with suggestions Palestinian president Mahmoud Abbas could refuse to meet US Vice President Mike Pence on his visit to the region later this month.

The UN Security Council was to meet later Friday in an emergency session to discuss Trump’s move, which has drawn near universal condemnation, including from United Nations Secretary-General Antonio Guterres.

Whether unrest would spread and spiral both in the Palestinian territories and elsewhere in the region was being closely watched.

Palestinian Islamist movement Hamas, which runs the Gaza Strip, was calling for a “day of rage” after its leader Ismail Haniya said a new intifada, or uprising, should be launched over Trump’s declaration.

Clashes and scuffles broke out in Jerusalem’s Old City as well as in other locations, including Hebron, Bethlehem and the Nablus area in the West Bank, after the main weekly Muslim prayers, but the unrest was limited so far.

Palestinians in some areas threw stones at Israeli forces, who responded with tear gas and rubber bullets.

In Jerusalem’s Old City, about 50 police pushed back some 200 demonstrators while kicking and hitting them with their batons.

Protests were also held in the Gaza Strip.

The Palestinian Red Crescent reported one wounded from live fire and 21 from rubber bullets so far in the West Bank. Another 14 people were wounded in the Gaza Strip from a combination of tear gas and rubber bullets

Demonstrations were also held in other Middle Eastern or Muslim nations, including Egypt, Malaysia and Turkey.

On Thursday, some 22 Palestinians were wounded from rubber bullets or live fire in sporadic clashes in the West Bank and Gaza Strip.

Several hundred additional police were deployed in and around east Jerusalem’s ancient Old City, the location of the Al-Aqsa mosque compound, the third-holiest site in Islam and where thousands attended the main weekly prayers.

Israel’s military has also deployed hundreds of reinforcements to the West Bank amid uncertainty over the fallout.

“It’s empty talk,” said a 20-year-old man who only gave his name as Omar as he walked toward Al-Aqsa for prayers.

“No matter what happens, we know Jerusalem is the capital of Palestine not of Israel. Israel is an occupier.”

Trump’s announcement on Wednesday has been met by a worldwide diplomatic backlash, though Israeli Prime Minister Benjamin Netanyahu has lavished praise on the president and called the declaration “historic.”

For Jewish Israelis, the declaration is a simple recognition of reality and validation of their view that Jerusalem is their 3,000-year-old capital.

Trump said his defiant move — making good on a 2016 presidential campaign pledge — marks the start of a “new approach” to solving the Israeli-Palestinian conflict.

But many analysts question how a fair peace process could be possible by granting such a major Israeli demand while seeming to require nothing in return.

Israel has long claimed all of Jerusalem as its undivided capital, while the Palestinians see the eastern sector of the city as the capital of their future state.

Its status is perhaps the most sensitive issue in the decades-long Israeli-Palestinian conflict, and international consensus has been that it must be negotiated between the two sides.

Trump’s declaration and intention to move the US embassy from Tel Aviv to Jerusalem are moves that may help him domestically since they were long-sought by US evangelical Christian and right-wing Jewish voters — key parts of his electoral base and important financial donors.

But while the declaration may mean little immediate concrete change, it risks setting off another round of bloodshed in the turbulent Middle East.

Russian President Vladimir Putin said he was “deeply concerned”, calling for the Palestinians and Israel to renew negotiations.

Muslim and Middle Eastern leaders, including key US allies, have expressed increasing alarm over Trump’s decision to break with decades of precedent with unpredictable consequences.

Turkish President Recep Tayyip Erdogan said it would put the region in a “ring of fire”.

Palestinian leaders have been so outraged that they have argued it disqualifies the United States from its traditional role as peace broker in the Middle East conflict.

Mohammad Shtayyeh, a senior Palestinian official who has been involved in past peace talks, questioned what was left to negotiate.

“If these are the signs of the ultimate deal, God knows what the deal is going to be,” he said, referring to Trump’s pledge to reach an Israeli-Palestinian peace agreement.

“Maybe the expulsion of the Palestinians — God knows where.”

The declaration is sure to weigh heavily on Pence’s upcoming visit.

He is due to meet the Palestinian president in the second half of December on a regional tour, but a senior member of Abbas’s Fatah faction said it would not occur.

“The American vice president is not welcome in Palestine. And President Abbas will not welcome him,” said Jibril Rajoub.

Abbas himself has not made similar comments and the White House is likely to only consider the meeting cancelled if he does so himself.

A White House aide said Pence “still plans to meet with Abbas as scheduled” and “believes it would be counterproductive for him to pull out of the meeting.”