Palestinians threaten ‘rage’ if Trump moves US embassy to Jerusalem. 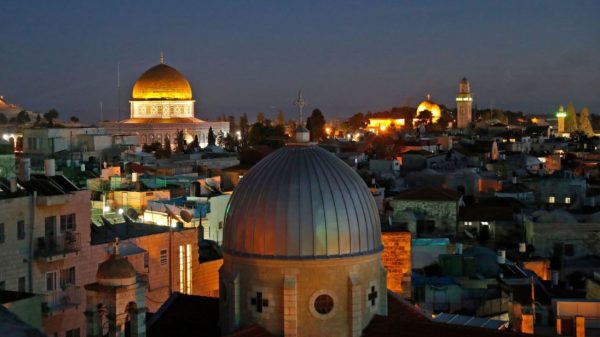 A picture taken on December 4, 2017 shows a general view of the skyline of the old city of Jerusalem, with the Dome of the Rock (L) in the Aqsa Compund. AHMAD GHARABLI/AFP/Getty Images)
Share:

President Trump has reportedly told Palestinian leader Mahmoud Abbas that the U.S. will move the U.S. Embassy in Israel from Tel Aviv to Jerusalem.

A spokesman for Abbas said Trump made the announcement in a phone call Tuesday, and that news has been confirmed by a tweet from the Palestinian Liberation Organization.

“President Mahmoud Abbas received a phone call from U.S. President Donald Trump in which he notified the president of his intention to move the American Embassy to Tel Aviv to Jerusalem,” Abbas spokesman Nabil Abu Rdainah said in a press release.

Rdainah did not say if Trump specified when the embassy would be moved, but the New York Times is reporting the move will not happen within the next six months due to logistical issues.

The White House confirmed President Trump spoke by phone with the leaders of Israel, Jordan, Egypt, Saudi Arabia and the Palestinian Authority and he reaffirmed his commitment to going forward with Israeli-Palestinian peace talks. They also discussed potential decisions regarding Jerusalem.

At the White House briefing this afternoon, Press Secretary Sarah Sanders would not confirm the president has decided to move the embassy to Jerusalem and said she did not want to ‘get ahead’ of an announcement planned for Wednesday.

When asked if Trump has reached a decision, she replied, “The president is pretty solid in his thinking at this point.”

In reply to a question by CBN’s David Brody about how the president reached his decision, she said it was a “thoughtful, interagency process.”

Palestinian Hamas leader Ismail Haniyeh says relocating the U.S. Embassy to Jerusalem “breaks red lines.” He’s threatening that any decision by the Trump administration to recognize the city as Israel’s capital would be “igniting the spark of rage against the occupation.”

The U.S. Consulate in Jerusalem says that since the Palestinians are calling for three days of rage, they’re warning U.S. citizens to avoid traveling in certain areas of Israel:

“With widespread calls for demonstrations beginning December 6 in Jerusalem and the West Bank, U.S. government employees and their family members are not permitted until further notice to conduct personal travel in Jerusalem’s Old City and in the West Bank, to include Bethlehem and Jericho.”

The Trump administration is planning an official announcement about the status of the embassy on Wednesday, including possibly recognizing Jerusalem as the capital of the Jewish state.

The Palestinian Authority and Arab governments have said that moving the embassy would cause unrest in the region.

Abbas warned Trump of the “dangerous consequences such a decision would have to the peace process and to the peace, security and stability of the region and the world,” Rdainah said.

The news of President Trump potentially recognizing Jerusalem as the capital of Israel is  sure to cause instability in the region.

Turkey’s president Recep Tayyip Erdoğan has described the status of Jerusalem as a “red line” for Muslims that could lead to his country severing diplomatic relations with Israel. The European Union has also warned of “serious repercussions.”

The Palestinians said they would also cut off contacts with U.S. diplomats.  And Saudi Arabia, a key U.S. ally in the region, cautioned against doing anything that would “obstruct the ongoing efforts to revive the peace process.”

Trump’s pledge to declare Jerusalem as the capital of Israel has caused controversy across the world.

Trump could announce the move as early as Tuesday, US officials with direct knowledge of the matter and foreign diplomats have told CNN.
Upon making his decision public, Trump is expected to sign a waiver to keep the US embassy in Tel Aviv for another six months, but say his administration will move the diplomatic mission to Jerusalem at some point — a goal long sought by Israel.
Trump told CNN in March that moving the embassy would happen “very quickly.”
The State Department’s security arm has been told to plan for potentially violent protests at US embassies and consulates if the Trump administration announces it is moving the embassy in Israel to Jerusalem.

So why is moving the embassy such a big deal?

If the United States moved the embassy to Jerusalem, it would mean that the US effectively recognizes Jerusalem as the capital of Israel. That would overturn 70 years of international consensus, and, many argue, would effectively signal the end of moves to achieve peace between Israelis and Palestinians.
The United Nations partition plan drawn up in 1947 envisaged Jerusalem as a separate “international city.” But the war that followed Israel’s declaration of independence one year later left the city divided. When fighting ended in 1949, the armistice border — often called the Green Line because it was drawn in green ink — saw Israel in control of the western half, and Jordan in control of the eastern half, which included the famous Old City.

When did that change?

During the 1967  War, Israel occupied East Jerusalem. Since then, all of the city has been under Israel’s authority. The city marks “Jerusalem Day” in late-May or early-June. But Palestinians, and many in the international community, continue to see East Jerusalem as the capital of a future Palestinian state.

Have any countries ever had their embassy in Jerusalem?

Yes. Before 1980 a number of countries did, including the Netherlands and Costa Rica.

But in July of 1980, Israel passed a law that declared Jerusalem the united capital of Israel. The United Nations Security Council responded with a resolution condemning Israel’s annexation of East Jerusalem and declared it a violation of international law.

So countries moved their embassies out of the city?

Correct. In 2006, Costa Rica and El Salvador were the last to move their embassies out of Jerusalem, joining the rest of the world in locating their embassies in Tel Aviv.

Just to be clear: What is America’s position?

The US has never had its embassy in Jerusalem. It has always been in Tel Aviv, with the Ambassador’s residence in Herzliya Pituach, about 30 minutes north.

In 1989, Israel began leasing to the US a plot of land in Jerusalem for a new embassy. The 99-year lease cost $1 per year. To this day, the plot has not been developed.

In 1995, the US Congress passed a law requiring America to move the embassy from Tel Aviv to Jerusalem. Proponents said the US should respect Israel’s choice of Jerusalem as its capital, and recognize it as such.
But every president since 1995 — Presidents Clinton, Bush and Obama — has declined to move the embassy, citing national security interests. Every six months, the President has used the presidential waiver to circumvent the embassy move.

What are Trump’s options if he goes ahead with the embassy move?

The first is to make use of the undeveloped plot that the US has been leasing since 1989. Or the US could turn its existing consulate in Jerusalem into the embassy. A final option might be to leave the embassy in Tel Aviv, but have the US Ambassador to Israel do his day-to-day work in Jerusalem.

What do the Palestinians make of it all?

Palestinian leaders are adamant that an embassy move to Jerusalem would be a violation of international law, and a huge setback to peace hopes.
President Mahmoud Abbas has turned to other world leaders, including Russian President Vladimir Putin and Jordan’s King Abdullah, to help pressure Trump to change his mind. The Palestine Liberation Organization has suggested it would consider revoking its recognition of Israel, and canceling all agreements between Israelis and Palestinians, should the move take place.
More immediately, there are fears it could set off a wave of unrest — perhaps even street protests and violence — in the Palestinian territories and across the Arab world.
The powerful Iraqi Shiite cleric, Muqtada al-Sadr, warned in January a statement on his website that moving the US embassy to Jerusalem would represent a declaration of open war against Islam. He called for the closure of the Israeli and US embassies in Islamic countries.
CBN/CNN
Share: