Venezuelans fail to reach a deal . Plan to meet again in 2 weeks 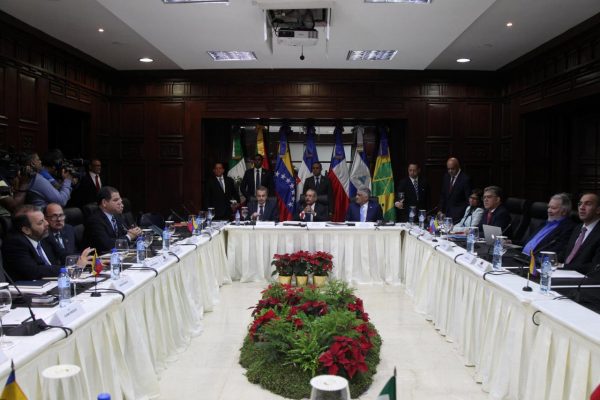 Members of Venezuela’s government and opposition coalition failed to reach a deal in a new round of talks in the Dominican Republic on Saturday aimed at resolving the OPEC nation’s protracted political crisis, but planned to meet in two weeks to try again.

Few Venezuelans expect further talks to yield a breakthrough, with Maduro’s foes demoralized at seeing him consolidate power ahead of a likely re-election campaign in 2018.

The disparate Democratic Unity coalition, which failed to dislodge Maduro in months of street protests earlier this year and then succumbed to infighting, is pressing primarily for a guarantee of free and fair voting next year.

It also wants a foreign humanitarian aid corridor to alleviate one of the worst economic crises in modern history, as well as freedom for several hundred jailed activists and respect for the opposition-led congress.

“This process is difficult, heavy, hard and full of debate and confrontation,” said Julio Borges, president of the opposition-led congress, adding he hoped the two sides could come closer on Dec. 15

The government and the opposition did not compromise on any key points, according to one participant in the talks who asked to remain anonymous because he was not authorized to speak to media.

The opposition’s bargaining power has been weakened by a surprising defeat in October gubernatorial elections. Furthermore, the multi-party group is divided, with more militant sectors opposing the talks they say simply buy the government more time.

However, debilitating U.S. sanctions against Maduro’s government have given his administration more impetus for the talks. Maduro wants any potential deal with the opposition to include joint pressure on Washington to back off.

“We said the true aid should come from putting an end to the attacks on Venezuela’s economy,” said information minister and government negotiator Jorge Rodriguez, who struck a more positive tone than Borges and said his side was “deeply satisfied” with the two-day talks.

There is no indication that U.S. President Donald Trump would be prepared to ease pressure on Maduro, whom he has called “a bad leader who dreams of becoming a dictator.”

Foreign ministers from Chile, Mexico, Bolivia, Nicaragua and host Dominican Republic acted as guarantors at the talks held at the Foreign Ministry building in Santo Domingo.