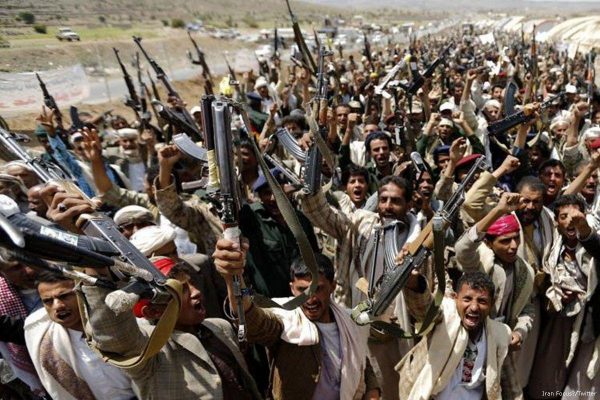 Most residents stayed home as clashes broke out in the streets between former allies Ali Abdullah Saleh and the Houthi forces as each side tries to take control of the city.

Zuhair al-Asbahi, a resident of Baghdad Street in central Sanaa, said that clashes broke out there and in surrounding areas the previous night and were still fiercely ongoing in several areas.

“The streets are free of people and all shops are closed as our street and other streets in Sanaa became conflict zones and people cannot leave to buy commodities,” Asbahi told Middle East Eye.

Asbahi works as an accountant in a local company, but the firm told all employees that today and tomorrow will be holidays. “The clashes have spread everywhere and if you leave your house that means you may sacrifice yourself,” he said.

Asbahi said most of his neighbours fled amid the clashes, but he prefers to stay with his family to guard his house. “I cannot flee my house with my belongings because cars cannot drive in our neighborhood amid clashes, so I prefer to stay, as thieves exploit such chaos to loot houses.”

Dozens were killed on both sides, including civilians, but there are no specific figures about casualties. “We hear the ambulances pass in the street towards al-Mutawakel Hospital,” he said.

Public institutions have declared holiday for employees until further notice.

The former president, Ali Abdullah Saleh, launched six wars against the Houthis rebels when he was in office. These conflicts continued from 2004 to 2010, and were stopped only by the revolution against him in 2011. Hussein Badreddin al-Houthi, founder of the Houthi movement, was killed by Saleh government forces in 2004.

In 2014, the Houthis launched what they called a “revolution” against the Sanaa government, and by then Saleh’s political opponents were controlling the country, so he supported the Houthis rebels.

The Houthis took over Sanaa and other provinces while the president, Abd Rabbuh Mansour Hadi, fled the country for Saudi Arabia.

The Houthis and Saleh remained allies until August, when clashes broke out in the capital between supporters of Saleh and Houthi fighters, and the Houthis killed a prominent figure of Saleh’s General People’s Congress Party (GPC).

After the clashes in August, both sides tried to calm the situation because they usually fight on the same side against the pro-government forces and the Saudi-led coalition, so things between them were quiet until Wednesday.

Ongoing battles in Yemen's capital #Sanaa. Reports of heavy weapons being used by Saleh forces and Houthis around city gates and airport.

Has #Yemen's former despot Saleh changed back his loyalty to former backers #SaudiArabia?

On Wednesday, some Houthi fighters tried to enter al-Saleh Mosque in Sanaa, which is under the control of Saleh, but the guards prevented them and fighting broke out between the guards of the mosque and the Houthis, followed by fighting with the guards of the house of Tareq Saleh, Ali Abdullah Saleh’s nephew.

A statement from Saleh’s GPC said on Thursday that three guards were killed when Houthi forces attacked the house of Tareq Saleh, adding that they also besieged the residence of Ibrahim Sharaf, a party member and foreign minister of the Sana’a-based government.

“The Houthis violated the truce agreement and attacked the residence of Colonel Tareq and killed three guards and wounded three others,” the statement said.

However, the leader of the Houthis, Abdul Malik al-Houthi denied in a TV address on Saturday that his fighters had stormed the mosque, attributing the reason behind the clashes to some militias that want to create chaos in Sana’a.

At least 14 were killed from both sides in the Wednesday clashes.

On Saturday, the Houthis fired three mortar rounds towards Tareq’s house, while Saleh’s supporters burned Houthi military vehicles; there are casualties from both sides. but there are no specific figures as the fighting is still ongoing.

Saleh vowed to “turn the page” and make peace with the Saudi-led coalition if it ends its attacks and blockades on Yemen, as his alliance with Houthi rebels continued to fray.

Saleh’s calls came during a live television address on Saturday, in which he vowed to change if Saudi Arabia stopped its “aggression” and lifted restrictions on Yemen, calling for “opening a new page with neighboring countries.”

MEE tried to contact Houthi sources for comment on the fighting, but they declined to speak. Some Houthi supporters reported news via social media that Houthi fighters still control most of Sanaa.

A statement from Saleh’s GPC appealed on Saturday to security and military forces and all public employees to be neutral and not to implement instructions given by the Houthis in all provinces.

“We appeal to the security and military forces and all public employees to remain neutral and not to implement the directions of the Houthis in any province. Houthis have insulted the military and security institutions and all other public institution,” the statement read.

“We ensure protection to those who want to return to the country, even for the honorable leaders and fighters of Ansarallah [the Houthis] if they remain neutral.”