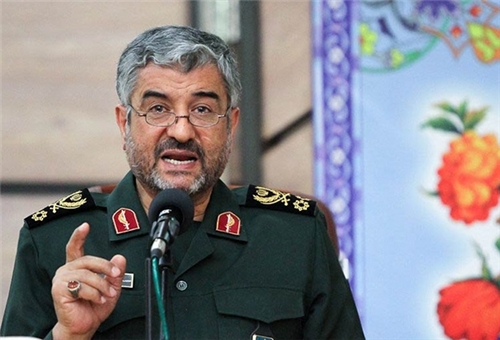 The commander of Iran’s Revolutionary Guards on Thursday warned that any future war in the region will result in the annihilation of Israel, Iranian Fars News Agency reported on Thursday.
“It is a proven claim that today we say any new war will lead to the eradication of the Zionist regime. They have seen a part of the resistance front’s power during the 33-day ( in reference to the 2006 war between Israel and Hezbollah) and the 22-day wars ( in reference to the 2014 war between Israel and Hamas in Gaza strip) and today that the great resistance front has been formed, this word has been proven,” General Jafari told reporters in a press conference in Tehran on Thursday.

“The fate of the resistance front is interwoven and they all stand united and if Israel attacks a part of it, the other component of the front will help it (the attacked part),” he added.

General Jafari warned that Lebanon is Israel’s first target, and said therefore the Lebanese Hezbollah resistance group should be armed against it to maintain security in Lebanon.

“This issue is not negotiable and the entire Lebanese nation, except a number of little puppet groups, support Hezbollah’s weapon,” he added.

In relevant remarks on Wednesday, General Jafari warned that the Zionist regime is no more a threat to Iran and the least mistake by it would be the last one.

He made the remarks, addressing a large number of Basij (volunteer) forces who had come to meet with Supreme Leader of the Islamic Revolution Ayatollah Ali Khamenei.

“Today, the issue of Palestine is the primary issue among the Muslim world, since it has been an Islamic country usurped and turned into a means of sabotaging the security of several countries in the region,” Khamenei tweeted. “This cancerous tumor [Zionist regime] should be fought against.”

General Jafari also said that marginalizing the US in the political and security developments of the region, the speedy annihilation of Takfiri terrorists and the desperation of the US regional allies in the region can be seen as indications of destroying the US hegemony in the Muslim world.

Today, the issue of Palestine is the primary issue among the Muslim world, since it has been an Islamic country usurped and turned into a means of sabotaging the security of several countries in the region. This cancerous tumor [Zionist regime] should be fought against.