King Abdullah: Security of the Arab Gulf is the cornerstone for the region’s security, stability 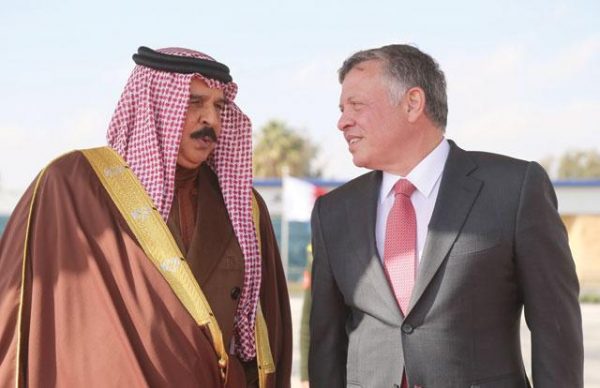 Amman-  King Abdullah on Tuesday met with Bahraini King Hamad Bin Isa Al Khalifa in Manama and discussed the bilateral relations between the two countries and the latest regional developments.

During the meeting, which was attended by senior officials from both countries, the two leaders stressed the “deep-rooted” relations between the two kingdoms and keenness to boost them in all fields, a Royal Court statement said, Jordan Times reported.

They underscored the importance of sustaining coordination between the countries on various issues, especially the regional challenges, which will help enhance the Arab joint action, and serving the Arab nation’s causes.

The talks addressed the crises that the Middle East is witnessing, and finding political solutions that would bring security and stability back to the region, in addition to the regional and international efforts in the war against terrorism.

The Bahraini King stressed his appreciation for His Majesty’s support and his important role in serving the Arab issues and enhancing cooperation among Arab countries, as well as his continuous endeavours to realise peace and stability in the region.

The visit comes 3 days after Bahrain’s interior ministry said  that Iran was behind an explosion that caused a fire at a major oil pipeline .

Following an investigation by local authorities, Interior Minister Rashid bin Abdullah Al Khalifa alleged groups linked to Iran conducted an attack near the village of Buri to destabilize the majority Shiite Muslim kingdom. Bahrain is led by a Sunni Muslim monarchy that is close to Saudi Arabia’s ruling family, and the accusation followed recent Saudi allegations of Iranian interference in Lebanon and Yemen that Riyadh has referred to as potential acts of war.