Bahrain accuses Iran terrorism of being behind oil pipeline explosion 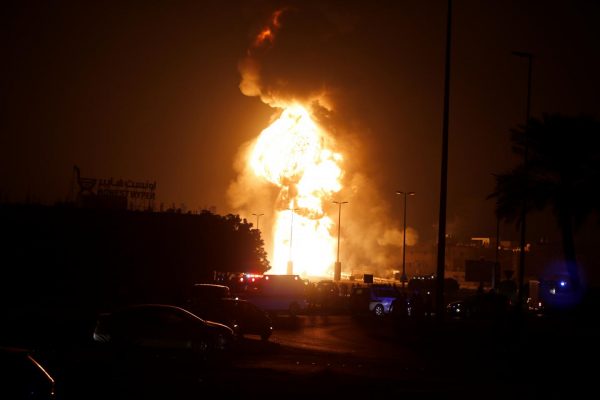 Emergency and rescue workers are seen blocking the road leading to a fire in at oil pipeline in Buri village south of Manama, Bahrain, November 10, 2017. Bahrain’s Interior Ministry has blamed the incident on Iran.
Share:

Bahrain’s interior ministry said Saturday that Iran was behind an explosion that caused a fire at a major oil pipeline a day earlier.

Following an investigation by local authorities, Interior Minister Rashid bin Abdullah Al Khalifa alleged groups linked to Iran conducted an attack near the village of Buri to destabilize the majority Shiite Muslim kingdom. Bahrain is led by a Sunni Muslim monarchy that is close to Saudi Arabia’s ruling family, and the accusation followed recent Saudi allegations of Iranian interference in Lebanon and Yemen that Riyadh has referred to as potential acts of war.

“His Excellency stressed that this is the latest example of a terrorist act performed by terrorists in direct contact with, and under instruction from, Iran. The Minister reaffirmed that the Ministry of Interior’s utmost priority is the safety and security of all citizens, and the Ministry will spare no effort to maintain public safety,” Bahrain’s Interior Ministry said in a statement.

“The Public Prosecution was informed of the incident at the point that security services started to investigate the causes of the fire. Evidence gathered during the investigation confirmed that this was an act of terrorism designed to undermine the security of the Kingdom and its citizens. A further investigation is currently underway to identify the perpetrators and to bring them to justice,” it added.

The ministry said Bahrain’s Civil Defense worked with Bahrain Petroleum Company’s security team to contain and extinguish the fire “in record time,” but that a number of buildings were damaged and local roads remained closed. The country is often portrayed as one of several fronts in a regional proxy war between Saudi Arabia and Iran, and at times it has been deeply affected by regional events.

Bahrain has blamed Iran for instigating protests against the royal family amid the Arab Spring democracy movement that swept the Middle East in 2011, and has alleged Iran has funded Shiite Muslim militants, including the Lebanese movement Hezbollah, in Bahrain.

Following Saudi Arabia’s lead, Bahrain cut off relations with Iran in January 2016 after Iranians protesting Saudi Arabia’s execution of a prominent Shiite Muslim cleric attacked Riyadh’s embassy in Tehran. In June, it joined the Saudi-led blockade of Qatar over that monarchy’s alleged ties to Iran and militant groups abroad.

In the latest effort to back Saudi Arabia in its war of influence with Iran, Bahrain urged its citizens earlier this week to leave Lebanon immediately, as Saudi Arabia accused Hezbollah of an alleged assassination plot against former Lebanese Prime Minister Saad Hariri, who resigned suddenly during an announced trip to Riyadh. Hariri, whose father was killed in a 2005 bombing his followers blamed on Hezbollah, Iran and Syria, has remained in Saudi Arabia under unclear circumstances, with a number of sources claiming the Saudi government was controlling his movements.

Hezbollah leader Hassan Nasrallah, who said he believed Hariri was being detained in Saudi Arabia, said Friday during a televised speech that Saudi Arabia had “declared war on Lebanon” through its actions. Saudi Arabian Foreign Minister Thamer al-Sabhan said Monday his government would treat Lebanon as a country having declared war on Saudi Arabia for Hezbollah’s supposed role in a plan to kill Hariri, of which Lebanese authorities said they found no evidence.

While Saudi Arabia escalates its pressure on Lebanon’s Hezbollah and Yemen’s Houthi movement—a Zaidi Shiite Muslim rebel group that took over Sanaa in 2014 in a campaign Saudi Arabia has accused Iran of supporting—Saudi Crown Prince Mohammed bin Salman Abdul Aziz Al Saud has embarked on an anti-corruption crackdown that saw dozens of princes, ministers and other officials detained on Sunday.