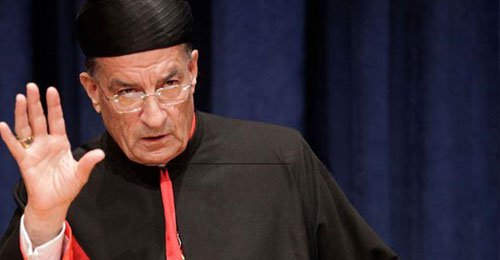 BEIRUT: The Lebanese head of the Maronite Catholic church, Patriarch Bechara Al-Rahi, will meet Lebanese Prime Minister Saad Al-Hariri when he embarks on a historic visit to Riyadh on Monday.
The Lebanese and Saudi sides both hailed the “momentous” visit, which comes at the invitation of King Salman and Crown Prince Mohammed bin Salman, but it will be amid a blurred political climate in Lebanon after Al-Hariri announced his resignation from Riyadh, where he has since been staying.
The patriarchate’s media spokesman, Walid Ghayyad, told Arab News that “the historic and exceptional visit comes at an exceptional time.” He revealed that the patriarch would be visited at his residence by Al-Hariri, who resigned as prime minister on Nov. 4.
He said that the patriarch would ask Al-Hariri about the reasons behind his resignation and will inform President Michel Aoun about the outcome of their talks.
Ghayyad, who will accompany the patriarch, said: “The visit has two sides: It is a dialogue and a communication visit for a man of peace. The patriarch represents all the Patriarchs and Christians of the East. He will carry a message of love and openness to Saudi Arabia, which is now witnessing further openness and positive changes. We thank the Kingdom for inviting the patriarch on this momentous visit, especially that it complements and activates historical relations between the two countries.”
Ghayyad added that “King Saud bin Abdulaziz had visited the Maronite Patriarchate in Bkirki, in Mount Lebanon, in 1953 and exchanged wonderful messages at the time. Thus, what is happening today is not new but rather a renewed step that has further aspects in light of the openness of the Kingdom.”
Al-Rahi’s visit to Riyadh is planned for one day only and a large media crew will accompany him. According to Ghayyad, “the visit will comprise a meeting with King Salman and Crown Prince Mohammed bin Salman. Also, the Patriarch will meet with the Lebanese community in Saudi Arabia, to discuss their concerns and aspirations.
“The Patriarch’s role is getting more and more important in light of the escalating problems the region is now witnessing. He is worried about all the Lebanese concerns. At a time when the language of war, violence and terrorism prevails, we need to promote the interfaith dialogue. This is what the patriarch is looking forward to,” said Ghayyad, adding that “ever since Al-Rahi was elected as patriarch, he chose ‘Partnership and Love’ as the title of his mission, to spread it all over the world through openness and dialogue.”
Ghayyad pointed out that “the developments in the Arab region have taken Al-Rahi’s visit to a greater national dimension, especially after the resignation of Al-Hariri. This visit now acts as a national mandate to be a continuation of the efforts initiated by President Michel Aoun after the eruption of the political crisis.”
As for Al-Hariri’s resignation, Ghayyad said: “The patriarch will not interfere in the political matter. The Lebanese State should handle this issue and not the patriarch.”
The Maronite Patriarchate’s spokesman stressed that “the visit will reinitiate the relations between the Patriarchate and Saudi Arabia. All the Lebanese are keen on the preserving the good relations with the Kingdom that have long been standing with Lebanon. Not to forget, a lot of Lebanese are working there and are loyal to the Saudi Kingdom.”
Ghayyad said: “We should all stand against terrorism; Patriarch Al-Rahi has repeatedly demanded to differentiate between Islam and terrorism, especially during his recent visit to the United States. Therefore, we have to show the real picture of Islam. Christians can play a major role in bringing together the divergent views of Muslims, as well as in highlighting and strengthening moderate Islam.
“The message of peace is a must at any time and place, otherwise people will resort to the language of weapons. We should all have a united vision regarding this issue and should all reject violence.”
Regarding the meeting between the patriarch and the Lebanese community in the Kingdom, Ghayyad said that “this is a father meeting with his sons.”
In Washington, the White House has called on “all states and parties to respect Lebanon’s sovereignty, independence, and constitutional processes.”
A statement released on Saturday said: “In this sensitive time, the United States also rejects any efforts by militias within Lebanon or by any foreign forces to threaten Lebanon’s stability, undermine Lebanese government institutions, or use Lebanon as a base from which to threaten others in the region.”
The White House said Al-Hariri “has been a trusted partner of the United States in strengthening Lebanese institutions, fighting terrorism, and protecting refugees.”