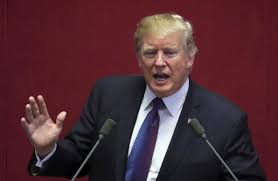 U.S. President Donald Trump issued a stark warning to North Korean leader Kim Jong Un on Wednesday, telling him that the nuclear weapons he is developing “are not making you safer, they are putting your regime in grave danger.”

“Do not underestimate us and do not try us,” Trump told North Korea as he wrapped up a visit to South Korea with a speech to the National Assembly in Seoul .

In a wide-ranging address that lodged specific accusations of chilling human rights abuses against Pyongyang, Trump used some of his toughest language yet against North Korea, calling on countries around the world to isolate Pyongyang by denying it “any form of support, supply or acceptance”.

Trump painted a dystopian picture of North Korea, saying people were suffering in “gulags” and some bribed government offiicials to work as “slaves” overseas rather than live under the government at home. But he offered no evidence to back those accusations.

Trump’s return to harsh language against North Korea comes a day after he appeared to dial back some of his bellicose rhetoric that had fueled fears across east Asia of the risk of military conflict. On Tuesday, Trump had even offered a diplomatic opening to Pyonynang to “make a deal”.

In Wednesday’s speech, Trump went mostly on the attack. But he did promise a “path to a much better future” for North Korea if it stopped developing ballistic missiles and agreed to “complete, verifiable and total denuclearization” – something Pyongyang has vowed never to do.

“We will not allow American cities to be threatened with destruction. We will not be intimidated,” he told South Korean lawmakers. “And we will not let the worst atrocities in history be repeated here, on this ground we fought and died to secure.”

“The world cannot tolerate the menace of a rogue regime that threatens it with nuclear devastation,” Trump said, speaking as three U.S. aircraft carrier groups sailed to the Western Pacific for exercises and a rare show of U.S. naval force in the region.

Aiming his words directly at Kim, Trump insisted: “The weapons that you are acquiring are not making you safer, they are putting your regime in grave danger. Every step you take down this dark path increases the peril you face.”

But Trump, whose strategy has stressed sanctions and military pressure instead of diplomacy, did not spell out any new approach to force North Korea to abandon its missile and weapons prorgammes.

North Korea has made clear that it has little interest in negotiations at least until it develops a nuclear-tipped missile capable of hitting the U.S. mainland, something U.S. intelligence officials say it may be just months away from achieving.

“North Korea is a country ruled by a cult,” Trump said in a speech that was interrupted several times by applause and ended with a standing ovation.

He stopped short, however, of repeating the derisive nickname “little Rocket Man” that he has applied to the young North Korean leader.

Kim, for his part, has called Trump “mentally deranged.”

The speech came after Trump’s attempt to make an unannounced visit to the heavily fortified border separating North and South Korea was aborted earlier on Wednesday when dense fog prevented his helicopter from landing, officials said.

Trump tried to travel to the Demilitarized Zone (DMZ) – the doorstep of the North Korean nuclear standoff – on the final day of a 24-hour visit to ally Seoul. He was then due to fly to China, where U.S. officials say he will press a reluctant President Xi Jinping to tighten the screws further on Pyongyang.

However, Trump and his entourage had to turn back when the weather made it impossible for his helicopter to land in the border area, the White House said. White House spokeswoman Sarah Sanders described Trump as disappointed and frustrated at having to abandon the trip.

A visit to the DMZ, despite his aides’ earlier insistence he had no plans to go there, would have had the potential to further inflame tensions with North Korea.

Trump’s earlier threats to “totally destroy” North Korea if it threatened the United States, and the personal insults he exchanged with North Korean leader Kim Jong Un after the North’s most recent missile and nuclear tests, had raised fears in the region of military conflict.