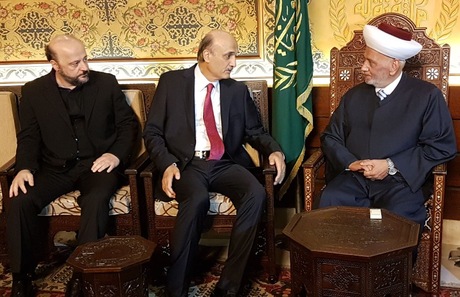 He  reassured  him that the Lebanese can overcome the crisis resulting from PM Saad Hariri’s resignation .

He called for  “calm and strenuous work.”

“Tomorrow I will have a lengthy interview on MTV and I will talk extensively about several issues,” said Geagea after the talks at Dar al-Fatwa.

“I was pleased to meet with the mufti, who is a major national figure. We wish many people had his wisdon and  clear vision. We spoke extensively about the current crisis and, God willing, through patience, calm and strenuous work we will manage to overcome this crisis,” Geagea added.

In response to a question on  whether Hariri will return soon to Lebanon, Geagea said: “I will speak tomorrow.”