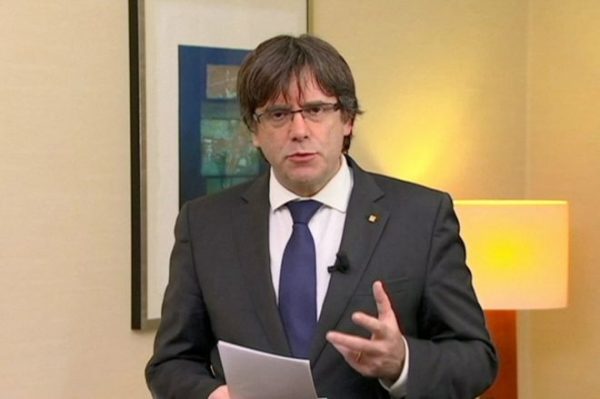 A Spanish judge has issued European Arrest Warrants (EAW) for sacked Catalan leader Carles Puigdemont and four of his allies who went to Belgium.

The five failed to attend a high court hearing in Madrid on Thursday when nine other ex-members of the regional government were taken into custody.

They all face charges of rebellion, sedition and misuse of public funds for pursuing Catalan independence.

Mr Puigdemont has said he will not return to Spain unless he receives guarantees of a fair trial.

Belgium will “study” the warrant, a spokesman for the state prosecutor told AFP news agency.

The regional parliament in Catalonia voted to proclaim an independent republic a week ago, following an illegal referendum on independence organised by the Catalan government on 1 October

No other country recognised the move and the Spanish central government moved swiftly to impose control, using emergency powers under the constitution.

Mr Puigdemont and his colleagues travelled to Belgium to raise their case for statehood at the EU institutions and he insists he is not trying to evade “real justice”.

He said in a Belgian TV interview aired earlier on Friday that he would co-operate with Belgian judicial authorities.

He also said that he was ready to run in snap regional elections in Catalonia next month.

The other four warrants are for:

Will the warrants be acted upon?

The warrants were sent to Belgian prosecutors, who have 24 hours to decide whether the paperwork is correct.

If they do, they will forward them on to a judge who will decide whether Mr Puigdemont and the four others should be arrested.

Belgium has a maximum of 60 days to return the suspects to Spain after arrest. But if the suspects do not raise legal objections, a transfer could happen much sooner.

A country can reject an EU arrest warrant if it fears that extradition would violate the suspect’s human rights.

Discrimination based on politics, religion or race is grounds for refusal. So are fears that the suspect would not get a fair trial.

There is an agreed EU list of 32 offences – in Article Two of the EAW law – for which there is no requirement for the offence to be a crime in both countries. In other words, any of those offences can be a justification for extradition, provided the penalty is at least three years in jail.

However, neither “sedition” nor “rebellion” – two of the Spanish accusations against the Catalan leaders – are on that list.

What about those already in prison?

Thousands of protesters have gathered in Barcelona and other Catalan cities for the second night running to call for the release of the former officials detained on Thursday.

Santi Vila, the Catalan former business minister, was granted bail at the request of prosecutors after spending a night in prison.

“My colleagues and I are fine, we are calm,” he said upon leaving jail in Madrid, but called the detentions “disproportionate”, Spain’s El País newspaper reports.

He had resigned from the cabinet before the Catalan parliament voted for independence.

Those who remain in custody are:

Protesters are also calling for the release of two grassroots separatist leaders, Jordi Sánchez and Jordi Cuixart, who were taken into custody last month. They lost an appeal for release on Friday.

Five senior members of the Catalan parliament, as well as Speaker Carme Forcadell, are facing the same charges but, because of their parliamentary immunity, their cases are being handled by the Supreme Court. Their hearings have been postponed until 9 November.