Israel claims to be ready to support Syria’s Druze, who claim Israel is backing rebels 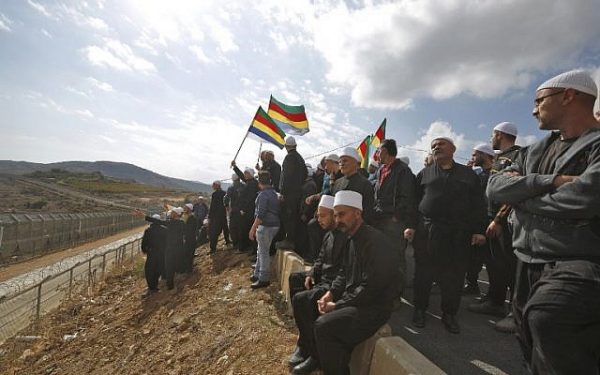 Israeli security forces say they are “prepared and ready” to prevent the capture of a village in Syria’s Quneitra province caught up in clashes between President Bashar al-Assad’s troops and rebels.

Violence erupted in Hader, in the Syrian-controlled part of the Golan Heights area that borders Israel, after a suicide attack at dawn on Friday killed at least nine people and injured more than 20 others

Hader is home to the Druze community, a minority religious sect found in Syria, Israel, the occupied Palestinian territories and Lebanon.

Fighting broke out between Syrian government troops and rebel fighters in Hader following the blast, leaving a Druze individual injured in the village of Majdal Shams on the Israel-occupied side.

SANA, the official Syrian news agency, said the incident involved a Jabhat al-Nusrasuicide bomber who detonated a car bomb near houses on the outskirts of Hader, leaving nine people dead and 23 injured.

It said the death toll was likely to rise as most of the wounded sustained serious injuries and had to be pulled out of the debris with difficulty in the face of gunfire and shelling by rebel fighters.

“It said it was to trying to end the blockade of villages in its continuing fight against Assad regime forces, and that it didn’t intend to harm the property or people of the village. But it warned those Druze villagers against fighting on the side of President Assad.”

In a statement, the Israeli military said it “is prepared and ready to assist the residents of the village and prevent damage to or the capture of the village Hader out of commitment to the Druze population”.

Our correspondent said there had been a call from the spiritual leader of the Druze in Israel for all Druze men, including soldiers serving in the Israeli army, to leave their posts to go and defend their brethren across the border.

“There was also a demonstration of about 150 people from this Druze village in the Israel-occupied Golan Heights along the border fence,” Al Jazeera’s Fawcett said.

“Because of this, we had this rather unusual statement from the Israeli military, raising the possibility of some kind of direct Israeli on-the-ground military involvement in Syria.

The Syrian Observatory for Human Rights (SOHR), a UK-based monitor, said the clashes were occurring between “the rebel and Islamic factions against the regime forces and gunmen loyal to them” in areas adjoining Hader.

It said that in addition to the exchange of fire and shelling, there was a big explosion caused by the detonation of a booby-trapped vehicle by one of the rebel groups at the entrance to Hader.

The SOHR said government troops and allied fighters were among the casualties of Friday’s clashes.

SANA said people in the Golan Heights took to the streets in protest against what it called Israeli support for “the terrorist attack launched by Jabhat al-Nusra” on Hader.

“Hundreds of Syrians demonstrated inside the occupied territories off the town of Hadar, which has been subjected, since the dawn, to a violent terrorist attack launched by Jabhat al-Nusra and backed by the Israeli occupation entity from al-Tuloul al-Homr area that is adjacent to the Israeli-occupied Palestinian territories,” SANA reported quoting “local sources in the Occupied Golan”.

According to the “local sources”, the demonstrators tried to cross the ceasefire line to support the families of Hader “in confronting the terrorist attacks amid reinforcements of the enemy’s soldiers to prevent them from advancing”.

The SANA report said that Israeli forces closed all the roads from occupied Palestinian territories to prevent the arrival of hundreds of Arab citizens in the Golan Heights to support the people in Hader.

Responding to some allegations by Druze that Israel was assisting Tahrir al-Sham, the Israeli military said: “the allegations of Israeli involvement and assistance to global jihadi elements in the fighting are groundless”.

Separately, the Israeli military said on Friday it had destroyed a drone operated by the Lebanese group Hezbollah over the Golan Heights.

“According to [Israeli army] intelligence, the Iranian-made UAV was operated by Hezbollah, and took off from Damascus Military Airport … The UAV was shot down by a single Patriot missile …”

Hezbollah fighters have been fighting alongside Assad government forces against rebel groups operating in the Golan area of Syria.

Hezbollah has not commented on the Israeli military’s claim.