Why Uzbeks became a key fighting force for ISIS 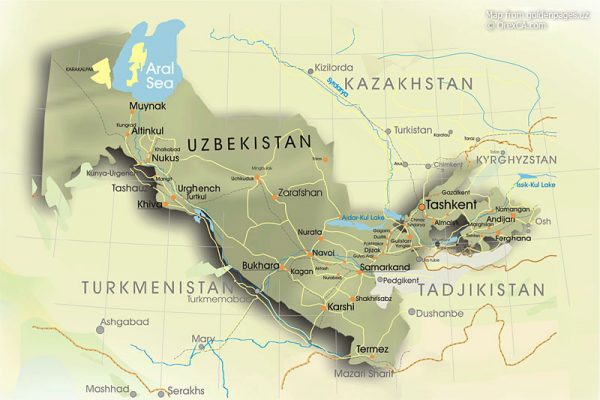 Tuesday’s deadly terror attack in New York was perpetrated by a suspected Uzbek national linked to the Islamic State (IS) group. Experts say Central Asians, and Uzbeks in particular, are a prominent fighting force in the militant group’s jihad.

If the nationality of the New York attacker is confirmed, at least four IS group-claimed attacks on the west have been carried out by either an Uzbek national or an ethnic Uzbek in the past year: The Istanbul nightclub shooting that killed 39, the Saint Petersburg metro bombing that killed 13, the Stockholm truck attack that killed four, and most recently, the Manhattan truck attack that left at least eight people dead and many more injured.

Although experts say Muslims from Central Asia have long proved to be both willing and easy recruits for the militants Islamists, they now account for one of the single largest IS group forces.

“Today, the biggest number of IS group recruits in Iraq and Syria come from Central Asia. We also know that these people have risen quickly in IS group ranks,” said FRANCE 24’s expert on jihadist movements, Wassim Nasr.

The estimates of the number of Central Asians that have joined the IS group vary widely, however, and is mainly due to a lack of intelligence capacities in tracking them.

“In the West, we know who the suspected jihadists are, we keep a check on them and their movements. In Central Asia it’s not the same, and it’s common for governments there to also downplay the numbers because it doesn’t portray a good image of their country. It’s bad for business, it’s bad for tourism,” Nasr said.

Uzbekistan, for example, has never released an estimate of the number of Uzbekis suspected of having joined jihadists groups abroad.

A report published by the independent think tank International Crisis Group (ICG) has put the number of IS group fighters in Syria and Iraq and who originate from Central Asia at between 2,000 and 4,000. But according to Nasr, along with many other experts, the real number is believed to be much higher. Uzbeks are seen as topping the list, followed by Kyrgyzstanis. The IS group has also been successful in its recruiting efforts in both Tajikistan and Turkmenistan.

The reasons for why so many Central Asian Muslims become radicalised are plentiful, but can broadly be blamed on poverty and the region’s secular, but mostly authoritarian regimes, which have clamped down hard on Muslims in recent years. Tajikistan banned its only Islamic party, the moderate Islamic Renaissance Party, in 2015, and in 2016 – in the face of the growing threats posed by the IS group – Tajik authorities banned men under the age of 45 from wearing beards. As such, some 13,000 men had their beards forcibly shaved by police. The sale, import and the wearing of veils are also prohibited. In addition in 2016, the country banned parents from giving their children “foreign-sounding Arabic names”. In Uzbekistan, it has been illegal to wear religious clothing in public since 1998, and more and more women are forced by authorities to remove their veils.

“When local grievances meet with a revolutionist ideology, this is what you get,” said Nasr. “Jihad is currently the only revolutionary ideology on the market.”

But jihadist groups are nothing new to Central Asia. The Islamic Movement of Uzbekistan (IMU), which has been listed as a terrorist group by the United States, was established already in the 1990s and some of its leaders are believed to have held top positions within al Qaeda. In 2015, IMU pledged allegiance with the IS group.

But the radicalisation of Central Asian Muslims does not just occur on home turf. Many of the IS group’s Central Asian recruits have actually been enlisted abroad, where they become easy prey as they become segregated as migrants, living on the outskirts of society.

In an interview with FRANCE 24 earlier this year, Clément Therme, a research fellow at the International Institute for Strategic Studies (IISS), said that this has especially been the case in Russia.

“Some 40 percent of Tajiks returning from Syria, or en route to Syria, have said they were recruited by the one and the same recruiter in Moscow,” he said.

Despite the demise of the IS group on the ground in Iraq and Syria, FRANCE 24’s Nasr said that the radicalisation of Central Asians is not expected to end any time soon.

“It’s an old phenomenon and it will be increasing, especially with the situation in Afghanistan today where the IS group is very, very present, and the diaspora from these countries who could go into action and be attracted by the jihadi ideology.”

A recent report from the International Institute for Counter-Terrorism back this claim, noting also the threat posed by Central Asian jihadists forced to return to their regions: “For the various Central Asian jihadists, Afghanistan and the Pakistan tribal areas seem the most suitable refuge. From there they can swarm in case of need for attacks into Europe, Central Asia, China, India and beyond.”