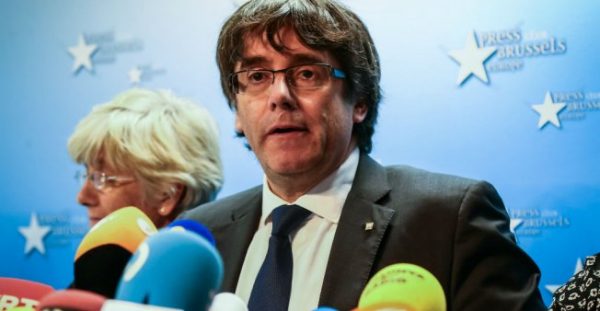 Axed Catalan separatist leader Carles Puigdemont’s lawyer confirmed Wednesday that his client will reject a Madrid court summons to be grilled about alleged rebellion and sedition in his quest for independence.

“He will not go to Madrid and I have suggested that he be questioned here in Belgium,” Belgian lawyer Paul Bekaert told Spanish television channel TV3.

Puigdemont, currently in Brussels, and 13 other members of his dismissed Catalan cabinet were told late Tuesday to be at Spain‘s top criminal court on Thursday and Friday.

The court wants to question them in an investigation over Catalonia‘s independence drive, which has plunged Spain into its biggest crisis in decades.

On Monday, Spain’s chief prosecutor said he was seeking charges of rebellion — punishable by up to 30 years behind bars — sedition and misuse of public funds.

The hearing by the National Court, which deals with major criminal cases, could see the 14 formally charged.

Oriol Junqueras, Puigdemont’s deputy, will attend, a spokesman for his party said. But it was unclear if others would do too.

Bekaert, a Belgian lawyer hired by Puigdemont, told Dutch broadcaster NOS late Tuesday that if his new client travelled to Spain there is a “good chance that he would be detained”.

Bekaert also told Flemish-language Belgian TV channel VTM that he did not foresee Puigdemont returning “within the coming weeks”.

If Puigdemont, 54, and the others fail to appear before the court, Spanish prosecutors could order their arrest. An international warrant could follow if they are abroad.

On Tuesday Puigdemont told a packed news conference in Brussels — before the court summons was announced — that he would not return until he had guarantees that legal proceedings would be impartial.

He insisted his cabinet remained “legitimate” despite having been dismissed by Madrid on Friday and said he was in Brussels “for safety purposes and freedom”.

“We want to denounce the politicisation of the Spanish justice system… and to explain to the world the Spanish state’s serious democratic deficiencies,” he said.

With its own language and distinct culture, Catalonia accounts for a fifth of Spain’s economy and 16 percent of its population.

An October 1 referendum saw ugly scenes as Spanish police tried to prevent people voting. Puigdemont’s camp said the result was a “yes” to secession but turnout was just 43 percent.

Puigdemont insists that this gave the Catalan parliament a mandate to declare independence last Friday.

The same day Spanish Prime Minister Mariano Rajoy’s government sacked the regional government and imposed direct control under a never before used article of the constitution.

There had been speculation that Catalan leaders and civil servants might refuse to cooperate but in the event the takeover of regional powers by Madrid has passed off smoothly.

Rajoy has also called snap elections for December 21 to replace the Catalan parliament. Puigdemont said he would “respect” the result and appealed to Madrid to do the same.

However, divisions appear to be growing in the separatist camp.

Santi Vila, a Catalan minister who resigned last week, accused his former colleagues Tuesday of “naivety” and not being ready for independence.

Fernando Vallespin, a political scientist in Madrid, said that Puigdemont, a former journalist, “is more interested in obtaining media attention than escaping justice”.

“It’s a media war. The aim of (the Catalan executive) has been to try and present the Spanish state as an oppressor state and Puigdemont needs to feed this narrative,” he said.

Another expert, Oriol Bartomeus, agreed, saying that Puigdemont’s apparent decision to risk being put behind bars by ignoring the court summons is an electoral ploy.

“In an election campaign a free Puigdemont won’t boost your score, but a Puigdemont in jail does,” Bartomeus, a professor at Barcelona Autonomous University, told AFP.

Puigdemont retains support among some ordinary citizens in Catalonia.

“If (the Spanish government) humiliate him then they humiliate also the more than two million Catalans who voted ‘yes’ in the referendum,” she told AFP.