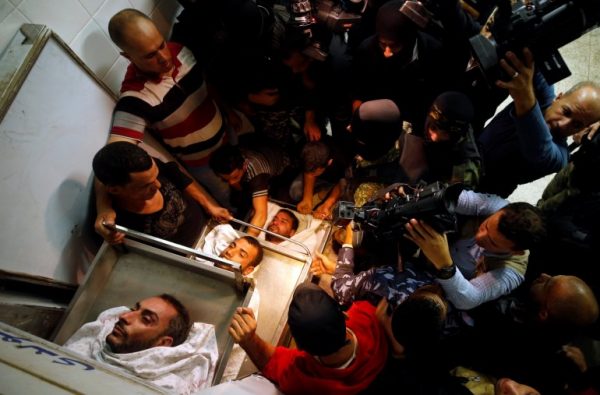 People gather around bodies of Palestinians killed in a tunnel near the border between Israel and central Gaza Strip October 30, 2017. Reuters/Mohammed Salem
Share:
Seven Palestinians, including an Islamic Jihad commander and two members of Hamas, have been killed and nine others reportedly wounded after Israel blew up a tunnel leading into the country from Gaza.

The detonation of the tunnel, which travelled under the border fence near the southern city of Khan Younis, was disclosed by the Israeli military on Monday. The incident represents a rare recent flare-up along the tense border that has remained largely quiet since a 2014 war with Gaza’s Hamas rulers.

A source for the Islamic Jihad militant group said Arafat Abu Marshould, head of the group’s armed wing in central Gaza, was killed with a senior associate and two other gunmen, adding that the group’s fighters were on “full alert”.

The armed wing of the Islamist Hamas group said two of its gunmen were killed while trying to rescue Islamic Jihad men working in the tunnel. Gaza health officials said nine people were wounded.

The Israeli military spokesman Lt Col Jonathan Conricus said the tunnel – which he suggested had been built since the 2014 war – was an “active” construction that Israeli forces had been been monitoring for some time.

Conricus said the tunnel was detected less than two miles from the Israeli village of Kissufim, but that no Israelis had been in danger.

He did not explain why Israel decided to detonate the tunnel this week, although the presence of fighters inside may have triggered the Israeli action.

Conricus called the tunnel a “grave and unacceptable violation of Israeli sovereignty” for which he held Hamas responsible.

The Israeli prime minister, Benjamin Netanyahu, said: “Those who try to harm us, we harm them … Today we detected a tunnel and destroyed it and we will continue to do so.”

Israel destroyed 32 tunnels during the 2014 war with Hamas and has since prioritised the destruction of any new digging.

The Islamic Jihad spokesman Daoud Shehab said Israel’s bombing of “a tunnel of the resistance is a terrorist aggression” and Palestinian resistance factions retained the right to respond “at the suitable time”.

Despite the threat of retaliation, Islamic Jihad is regarded as having far less capacity to retaliate than Hamas, which has fought three conflicts with Israel in Gaza.

Hamas is due to hand control of Gaza back to the Palestinian Authority by 1 December under the agreement. Israel has warned that it will not accept a unity government that includes Hamas if it does not disarm and recognise the country, among other demands.