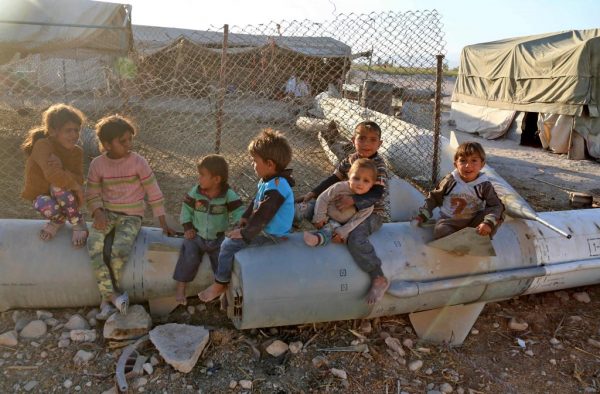 yrian children play as they sit on the tip of an abandoned missile at the Ash’ari camp for the displaced in the rebel-held Eastern Ghouta area outside the capital Damascus. AFP photo
Share:

A tightening siege by government forces has pushed people to the verge of famine in the eastern suburbs, residents and aid workers said last week, bringing desperation to the only major rebel enclave near the Syrian capital.

The U.N. Office for the Coordination of Humanitarian Affairs (OCHA) said on Twitter they had entered the towns of Kafra Batna and Saqba.

The Syrian Arab Red Crescent said in a separate tweet that the inter-agency convoy had 49 trucks.

They carried food, nutrition and health items for 40,000 people in need, OCHA spokesman Jens Laerke said. “The last time we reached these two locations were in June 2016,” he said.

A health worker in Saqba who was present when the convoy started to offload said that nine trucks of foodstuffs, including milk and peanut butter, and four trucks of medicines had arrived so far.

Technical specialists were on board to assess needs in the towns in order to plan a further humanitarian response, he said.

At least 1,200 children in eastern Ghouta suffer from malnutrition, with 1,500 others at risk, a spokeswoman for the U.N. children’s agency UNICEF said last week.

Food, fuel and medicine once travelled across frontlines into the suburbs through a network of underground tunnels. But early this year, an army offensive nearby cut smuggling routes that provided a lifeline for around 300,000 people in the enclave east of the capital.