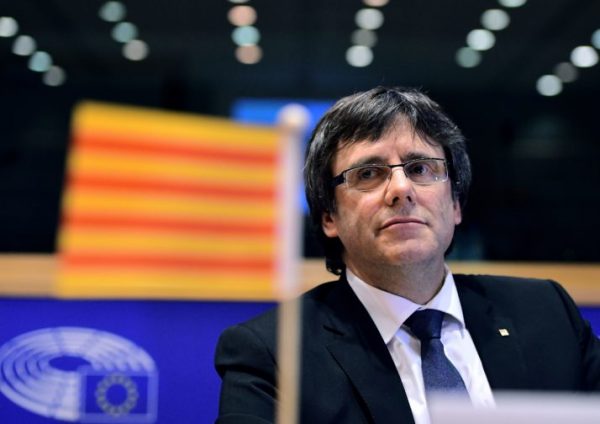 Carles Puigdemont at the European Parliament in Brussels in January 2017 | Emmanuel Dunand/AFP via Getty Images
Share:

The Spanish government forced Catalonia’s separatists to choose between fight and flight this past weekend. In the end, they chose both, but the decision still isn’t likely to bring their dream of independence any closer to reality.

The two biggest parties in the region’s coalition government both said Monday that they will take part in new elections on December 21 that were called this weekend by Spain’s Prime Minister Mariano Rajoy. They made the decision despite their government declaring independence from Spain on Friday. (As such, they shouldn’t logically be recognizing Rajoy’s power in the region any more.) The move implicitly recognizes that the independence they declared is still essentially a fiction, but it also implies that they think they have a decent chance of getting a new, firmer mandate for independence by Christmas.

The ‘fight’ reflex is still—mercifully—contained in the form of peaceful, democratic politics. There doesn’t seem to be much appetite for a second civil war. Even after Madrid imposed direct rule—Rajoy dismissed both the regional government and police chief—there was no establishment of a government-in-exile, no campaign of mass disobedience, no street barricades, no police and army units declaring for the new Republic. Even a call for a general strike by Catalonian labor unions was a damp squib, with public- and private-sector workers alike mainly turning up for work as usual.

Hardliners, Hemingway aficionados, and the nostalgics of Left and Right trying to style the current stand-off as a rerun of the 1930s may have been disappointed, but Spain’s financial markets heaved a huge sigh of relief. The benchmark IBEX 35 index soared 2.3%.

It was left to Catalonia’s now-deposed leaders to show the ‘flight’ reflex. According to La Vanguardia, First Minister Carles Puigdemont and other senior members of the old government have fled to the EU’s capital in Brussels, Belgium, and with good reason.

Spain’s Attorney General Jose Manuel Maza said his office would charge Puigdemont with rebellion, sedition, and abuse of public funds on Monday. Charges are also to be filed against Puigdemont’s right-hand man Oriol Junqueras, the head of the left-wing ERC party that is the PdeCat’s coalition partner, and Carme Forcadell i Lluis, the speaker of the Catalan Parliament who actually pronounced the result of Friday’s vote.

Puigdemont desperately needs to rally EU support for his movement if he is to deliver his promise of independence, but so far, European leaders have taken every opportunity to distance themselves from him and his movement.

Like Scotland’s nationalists, Catalonia’s see themselves as part of a broader European current steeped in democracy and the rule of law. They see the EU’s over-arching institutions as a way to realize national aspirations outside contemporary states into which they feel they were shoe-horned and then locked.

But unlike Catalonia, Scotland (perhaps mindful of its lack of the ‘soft power’ attributes that do so much to curry international sympathy—an inviting climate, a majestic soccer team and edible food) was careful enough to do things by the book, in close coordination with the U.K. government in Westminster.

The Oct. 1 vote organized by Puigdemont’s government was illegal under Spanish law, had a turnout of just over 43%, and was boycotted by a majority of Catalonian citizens (the ‘silent majority’ that took to the street in Barcelona in huge numbers Sunday). An EU full of similar tensions from Italy to Belgium and the (soon-to-depart) U.K. has little wish to treat them as legitimate family members. Commission President Jean-Claude Juncker warned earlier this month that the EU would create “chaos” by recognizing Catalonia, and Donald Tusk, who leads the EU Council that brings together the EU’s 28 member states, tweeted on Friday that “For EU nothing changes. Spain remains our only interlocutor.”

Puigdemont will no doubt spend the next two months trying to convince anyone who will listen that there’s no reason for the EU to exclude an independent Catalonia: its laws already conform completely with the EU’s, it already uses the euro, and it overwhelmingly supports the EU integration project, after all.

But—oh, the irony!—his stay in Belgium may be cut short by one of that project’s most important achievements. The European Arrest Warrant, adopted in 2004, effectively forces EU member states to extradite suspects wanted for crimes in another member state. Unlike most extradition agreements, the EAW explicitly rules out the possibility of an asylum claim on the grounds of political persecution.