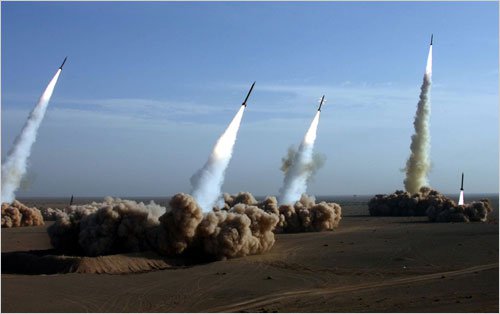 Iran will continue to produce missiles for its defense and does not consider that a violation of international accords, President Hassan Rouhani said on Sunday in a speech broadcast on state television.

Rouhani spoke days after the U.S. House of Representatives voted for new sanctions against Iran’s ballistic missile program, part of an effort to clamp down on Tehran without immediately moving to undermine an international nuclear agreement.

He also meet the head of the U.N. nuclear watchdog in Tehran, who again vouched for Iran’s compliance with the 2015 accord that curbed its nuclear program in return for sanctions relief, which has drawn fire from U.S. President Donald Trump.

“We have built, are building and will continue to build missiles, and this violates no international agreements,” Rouhani said in a speech in parliament.

The United States has already imposed unilateral sanctions on Iran, saying its missile tests violate a U.N. resolution, that calls on Tehran not to undertake activities related to missiles capable of delivering nuclear weapons.

Iran denies seeking nuclear weapons and says it has no plans to build nuclear-capable missiles.

Rouhani also criticized the United States over Trump’s refusal this month to formally certify that Tehran is complying with the accord on Iran’s nuclear program, even though international inspectors say it is.

“You are disregarding past negotiations and agreements approved by the U.N. Security council and expect others to negotiate with you?” Rouhani said.

“Because of the behavior it has adopted, America should forget any future talks and agreement with other countries,” Rouhani added, referring to unnamed countries in East Asia, an apparent reference to  its ally North Korea.

“Director General Amano reiterated that the nuclear-related commitments undertaken by Iran are being implemented, and that the JCPOA represents a clear gain from a verification point of view,” it said, using an abbreviation for the 2015 accord.

“For the future, he stressed the importance of full implementation by Iran of its nuclear-related commitments in order to make the JCPOA sustainable.”

Trump’s decision not to certify Iranian compliance with the landmark nuclear deal between Iran and six world powers means Congress now has less than 60 days to decide whether to re-impose sanctions on Tehran that were lifted under the agreement that Amano’s agency is in charge of policing.

Iranian Supreme Leader Ayatollah Ali Khamenei has said Tehran will stick to the agreement as long as the other signatories do, but will “shred” the deal if Washington pulls out, as Trump has threatened to do.

U.S. Ambassador to the United Nations Nikki Haley has pressed the IAEA to seek access to Iranian military bases to ensure that they are not concealing activities banned by the nuclear deal.

Asked whether Amano had made any requests for new inspections, Salehi said after meeting Amano: “He has no request in this area,” Iran’s state news agency IRNA reported.

Salehi said Iran could resume production of 20 percent enriched uranium in four days, but did not want the Iran deal to fall apart.

U.S. Defense Secretary Jim Mattis said on Saturday that he could not imagine the United States ever accepting a nuclear North Korea, and stressed during a week-long trip to Asia that diplomacy was America’s preferred course.