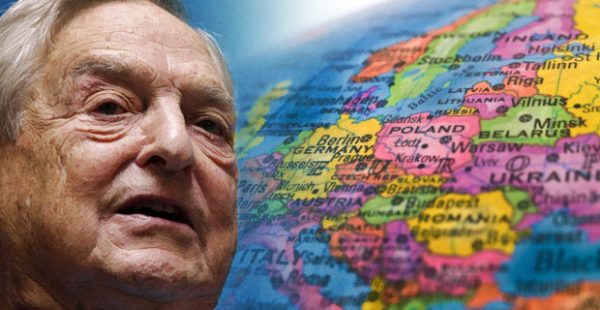 Hungarian Prime Minister Viktor Orban renewed his assault on George Soros, instructing his intelligence services to map what he described as the networks run by the billionaire financier’s “empire” targeting his country.

Intelligence agencies will help evaluate what he sees as efforts by Soros to get Hungary punished by EU institutions pursuing a “mixed-population” continent, Orban said in an interview with Kossuth Radio on Friday.

Orban, who is the favorite to win next year’s parliamentary elections, said Europe is set to be split between a “migrant-free zone” and those in the west who refuse calls to “haul” undocumented migrants away.

Soros, whose philanthropy has supported education and pro-democracy activism in Hungary since the 1980s, has hit back at Orban, himself a former Soros scholar, accusing him of running a “mafia state.”
Orban’s Fidesz party has increased its backing to 59 percent of decided voters, a Tarki survey published this week showed, reflecting an apparent success of his campaign focused on migration and anti-Soros billboards. With radical nationalist Jobbik poised for second place in Hungary, the allure of anti-immigrant and euro-sceptic rhetoric has also extended in gains at last weekend’s election in the Czech Republic.

George Soros 87,  born György Schwartz is a Hungarian-American investor, business magnate, philanthropist, and author. Soros is one of the world’s most successful investors. As of May 2017, he had a net worth of $25.2 billion, ranking among the 30 richest people in the world.

Born in Budapest, to a well-to-do Jewish family he survived Nazi Germany-occupied Hungary and emigrated to England in 1947. He is known as “The Man Who Broke the Bank of England” because of his short sale of US$10 billion worth of Pound sterling, making him a profit of $1 billion during the 1992 Black Wednesday UK currency crisis. In 1956 Soros moved to New York City . He reporttedly played a significant role in the peaceful transition from communism to capitalism in Eastern Europe in the late 1980s and early 1990s.