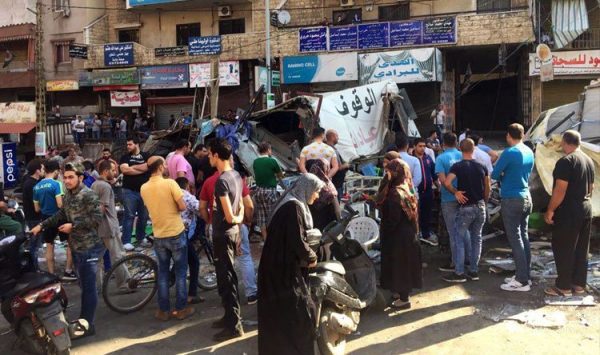 Dozens of angry residents in Hezbollah’s southern  Beirut stronghold  of Hay al-Sellom poured into the streets, burning tires and blocking some roads to prevent the police from confiscating  or damaging their vending properties.

The protest turned against Hezbollah, which had promoted the campaign against violators. In an usual move, some took their grievances to live TV, demanding compensation from Hezbollah and even cursing the group’s leader Sayyed Hassan Nasrallah.

The  raid by the Internal Security Forces   targeted   unlicensed street vendors in Hay al-Sellom . It  used bulldozers to take down shacks where vendors mainly sold coffee and mobile phones.

Public displays of anger against Hezbollah  in Lebanon are rare, especially in the group’s strongholds.

Hezbollah’s  parliamentary bloc on Thursday blasted what it called “cheap political and media exploitation” of the latest crackdown on street vendors in Hay el-Sellom and the uproar that followed it.

“As the bloc highly appreciates the patience of our people and their endurance of the dire economic and social situations and the state’s negligence towards the development of their regions, it stresses that the constant demand of Beirut’s southern suburbs is the implementation of the law, the enforcement of social security and the removal of illegal violations,” said the bloc  in a statement issued after its weekly meeting.

It called for “the widest cooperation with the measures aimed at enforcing the law,” rejecting “any excuse aimed at justifying the violations that harm our people in Beirut’s southern suburbs before anyone else.”

The  bloc  described the latest U.S. sanctions on Hezbollah as a “U.S. aggression against Lebanon, its people and its sovereignty.”

“The financial sanctions law that the U.S. House of Representatives voted for yesterday is a blatant interference in Lebanese domestic affairs, a violation of national Lebanese sovereignty and an unacceptable attack against the Lebanese people,” the bloc said.

It also warned against “the risks of submission or fear from this policy,” calling for “a firm sovereign stance” and “practical rejection of this behavior.”

Conflicting media reports emerged Thursday on whether or not the army’s Intelligence Directorate had arrested a man who cursed the Hezbollah chief on live TV.

This is perhaps the first time that some residents of the southern suburb stronghold of  Hezbollah have dared to insult Sayyed Hassan Nasrallah directly on the air, in front of the camera  and to criticize his participation in the war in Syria. Some in the media questioned whether this is  an uprising or just a reaction to the removal of unlicensed vendors  or just an expression of  the  Shiite public opinion that is brewing underground and could not express itself and object to the wars fought by the party .

What happened in  the morning of the twenty-fifth of October 2017 is the most significant response to the announcement of Iranian President Sheikh Hassan Rowhani just two days ago that “the status of the Iranian nation in the region today is greater than ever.” “Where is it possible, in Iraq, Syria, Lebanon, North Africa and the Persian Gulf, to make a decisive decision without taking the Iranian position into account?” He said.

Future movement parliamentary bloc on Tuesday warned that Iran is seeking to impose “hegemony” on Lebanon and the region.

“President Rouhani’s arrogant and insolent remarks are totally rejected and Lebanon is an independent Arab state that rejects any hegemony and any insult against its dignity,” Future movement added in a statement issued after its weekly meeting, echoing similar remarks by Hariri.

“Lebanon is an independent Arab state that accepts no guardianship and refuses what undermines its dignity,” stated  PM Hariri earlier

“Rouhani’s affirmation that no decision is made in Lebanon without Iran is unacceptable,” emphasized the PM replying to Rouhani’s remarks in a Monday tweet.

Hezbollah MP  reacts to the incident

MP Ali Ammar told Hezbollah chief  Sayyed Hassan Nasrallah, in response to the  wave of insults that Nasrallah was subjected to by saying: “Anyone who attacks a turban like Nasrallah’s is only paving  the way for all the turbines .”

“I remember when I tried to kiss your  shoes but you kept me away, and I felt at this moment as I   was kneeling under your  feet that I was living in a different world the world of the kingdom.”