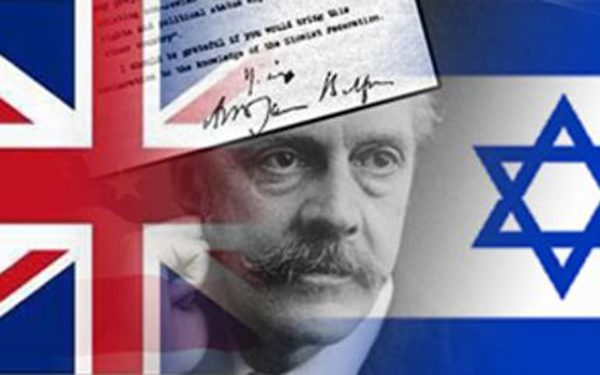 The declaration was contained in a letter dated 2 November 1917 from the United Kingdom’s Foreign Secretary Arthur Balfour to Lord Walter Rothschild, a leader of the British Jewish community, for transmission to the Zionist Federation of Great Britain and Ireland.
Share:

Palestinians in the UK have welcomed Jeremy Corbyn’s decision not to attend events organised by a pro-Israel group celebrating the Balfour Declaration centenary.

WHAT IS THE BALFOUR DECLARATION?

For supporters of the Zionist cause, the declaration marks the first milestone leading to the creation of Israel in 1948.

The letter conditioned British assistance so that there be no “prejudice” against the rights of existing non-Jewish populations living in the area.

After the defeat of the Ottoman Empire during the first world war, the UK became the dominant power in the region and established Mandate rule in Palestine.

A long-term critic of Israel’s occupation of Palestinian land, the leader of the opposition Labour Party has not yet explained his reasons for not attending “About Balfour 100” – a series of country-wide events in October and November marking the occasion including lectures, dinners, film screenings, and Jewish religious services.

November 2 marks 100 years since the declaration.

Ben Jamal, the director of the UK-based Palestinian Solidarity Campaign (PSC), told Al Jazeera that others should follow Corbyn’s example.

“It’s highly appropriate that Jeremy Corbyn has refused the invite and shameful that any British politician would consider participating in an event that celebrates the declaration,” he said, describing the Balfour statement as an “act of imperialism by which Britain disregarded the rights, wishes, and claims of the Palestinian people who made up nearly 90 percent of the population of Palestine in 1917”.

Pro-Palestinian groups have pressured Britain to apologise for the 1917 declaration, which promised the Zionist movement a homeland for the Jewish people in Palestine.

Foreign office officials have previously told Al Jazeera that the British government considers the declaration a “historical statement” and one it would not apologise for.

Supporters of the Zionist movement commemorate the declaration by then-British Foreign Secretary Arthur James Balfour as the first step in the eventual creation of Israel.

However, for Palestinians, the declaration represents the moment an imperial power promised their land away to another people.

They hold Balfour responsible for their subsequent expulsion, displacement, and occupation.

According to Jamal, the declaration and subsequent British occupation of Palestine created the “framework” for dispossessing Palestinians that continues to this day.

“For Palestinians, Balfour was an action of betrayal and its anniversary should prompt sombre reflection on a shameful episode in British history,” said Jamal.

“To celebrate is to reinforce the message to Palestinians that their rights are still regarded as second class.”

Jamal’s roots stretch back to West Jerusalem but his family was forced out of the city by Zionist militias in 1948, and his relatives were thereafter scattered across the region.

His great-uncle, Shibli Jamal, was secretary of a delegation of Palestinians which unsuccessfully attempted to negotiate the revocation of the Balfour Declaration with Winston Churchill, who was then secretary of state for the colonies.

“The delegation made clear to Churchill that the policy Britain was building would lead inevitably to the dispossession of the Palestinian people, a prediction made real in 1948 when over 700,000 Palestinians, including my grandparents, were driven into exile,” said Jamal.

In the year the group spent in the UK, the delegation organised what Jamal believes was Britain’s first rally in support of Palestinian rights.

Before leaving the UK, Shibli Jamal wrote to Churchill promising Palestinians would never give up the struggle for their land.

“The people of Palestine will not be satisfied with promises that some control of their destiny will be given to them in the future. They will never admit the right of any outside organisation to dispossess them of their country,” his letter read.

Although Corbyn has refused to justify his decision, he has in the past unequivocally condemned Israel’s violations of Palestinian rights.

Al Jazeera contacted the Labour Party requesting an explanation of Corbyn’s reasons for not attending, but the issue was not addressed.

A spokesperson said: “Jeremy is unable to attend this event, but Labour’s Shadow Foreign Secretary Emily Thornberry will be attending.”

Malaka Mohammed, a Palestinian studying in England, said she was slightly disappointed by Corbyn’s response.

“I would not call it a significant step [but] I think it’s a step in right direction that Corbyn has not bowed to pressure and accepted the invitation,” the PhD candidate at Exeter University told Al Jazeera. “It’s the least I expect from someone who has been campaigning for justice throughout his life.

“As a Palestinian who has been directly affected by the Balfour Declaration, I would like a statement explaining his reasons for rejecting the invitation … I think it should be condemned by himself and the Labour Party.”

Mohammed described how her relatives were forced from their homes in what is now Israel to the Gaza Strip, from where they were never allowed to return.

“The fact that we are dispersed and scattered all over the world, unable to go back home or live a stable life, is a consequence of the 1917 Balfour Declaration,” she said.

“It’s a grave injustice we are subject to. My land is not a land I am allowed to visit, all I know of it is through the stories my grandparents would tell me when I was a kid.”

Mohammed and Jamal are now focused on the British government and its behaviour as the centenary approaches.

Jamal’s PSC is organising a rally in London on November 4 to protest the UK’s role in displacing Palestinians.

For Mohammed, nothing less than a British apology will suffice.