Joy mixed with caution in Gaza after Palestinian unity deal 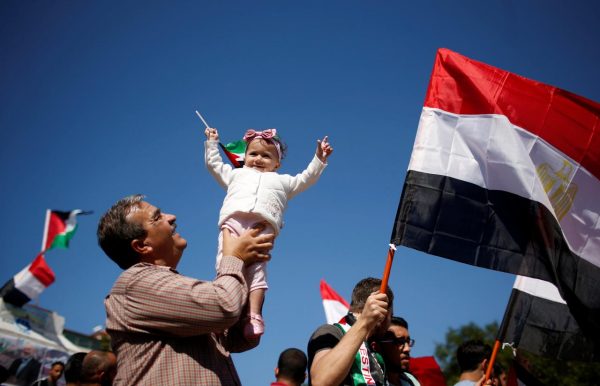 A girl is carried as Palestinians celebrate after Hamas said it reached a deal with Palestinian rival Fatah, in Gaza City October 12, 2017. REUTERS/Suhaib Salem
Share:

It didn’t take long after the firework smoke cleared in Gaza for some Palestinians to start questioning whether a unity deal between their two most powerful factions would hold.

Thousands took to the streets overnight celebrating the pact between Fatah and Hamas sealed in Cairo. Loudspeakers blasted national songs as youngsters waving Palestinian and Egyptian flags danced and hugged one another.

“I am happy, no I am the happiest,” Ali Metwaly, a 30-year-old computer engineer, said the morning after. “But I am still afraid it will end in disappointment. My leaders have taught me they can easily disappoint us. I hope they don‘t, this time.”

Under the reconciliation pact, Hamas is handing over administrative control of Gaza, including the Rafah border crossing – once the main gateway to the world for the two million Palestinians in the territory – to a government backed by the mainstream Fatah party.

A decade ago, Hamas forces seized the Gaza Strip from Fatah forces in a brief civil war. Past Egyptian mediation attempts to reconcile the two rivals failed to achieve lasting results. The latest clinched its elusive agreement after an economic squeeze on Hamas.

Analysts said the deal is more likely to stick than earlier ones, given Hamas’s growing isolation and realization of how hard Gaza – its economy hobbled by border blockades and infrastructure shattered by wars with Israel – was to govern and rebuild.

Like about 250,000 other people in the territory, her husband is unemployed. Unable to pay their rent, the family has been living in a tent since their landlord evicted them three days ago.

“Now that they signed a reconciliation deal, God-willing the blockade will be lifted and people will find work and be able to earn a living for their children,” she said.

Control of the Gaza border crossings with Israel and Egypt by the Fatah-dominated Palestinian Authority, which exercises limited self-rule in the occupied West Bank, could allow freer movement of people and goods across the frontier.

And under the agreement, about 3,000 Fatah security officers are to join the Gaza police force, although Hamas would remain the most powerful armed Palestinian faction, with around 25,000 well-equipped militants.

Hamas and Fatah are also debating a potential date for presidential and legislative elections and reforms of the Palestine Liberation Organization, which is in charge of long-stalled peace efforts with Israel.

The last Palestinian legislative election was in 2006, when Hamas scored a surprise victory. That triggered the political rupture between Hamas and Fatah, which eventually led to their short civil war in Gaza.

Palestinian political commentator Mustafa Ibraham said with major issues, such as an election date and agreement on a common political agenda, still outstanding, Palestinians should be cautious.

Hamas, which has fought three wars with Israel since 2008 and is considered a terrorist group by the West, has said it will not abandon the “arms of resistance”. Israel has said Hamas must disarm, or the reconciliation will be meaningless.