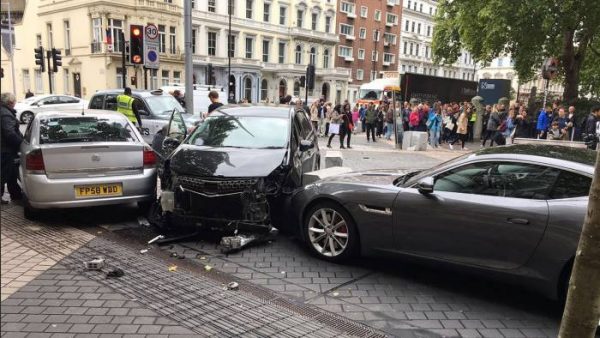 A photo obtained from Twitter user @StefanoSutter shows damaged vehicles on Exhibition Road, in between the Victoria and Albert museum and the Natural History Museum, in London on Oct. 7, 2017. (@StefanoSutter / AFP/Getty Images)
Share:

Police on Saturday arrested a man in London’s museum quarter after a car hit a number of pedestrians on Exhibition Road, in an incident whose motive the police said they were still investigating.

The collision, which the police said had left a number of pedestrians injured, comes only months after three attacks in London in which vehicles were deliberately been driven on to pavements by attackers.

However, the area where Saturday’s incident occurred is also notable as an experiment in shared space, with no clear demarcation between the pavement and road, making a chance collision between a vehicle and pedestrians more likely than elsewhere.

A statement from the Metropolitan Police said they had been called at 2.21pm to a report of a collision on Exhibition Road, south Kensington. The area concerned is between the Victoria and Albert Museum and the Natural History Museum, one of London’s busiest tourist areas.

Video posted on social media showed a black Toyota Prius in the pedestrian area outside the Victoria and Albert Museum with a Vauxhall Astra, which it appeared to have struck. Ambulance staff were tending a man on the ground. The collision happened at the busy junction between Exhibition Road and Cromwell Road.

The police said it was believed a number of pedestrians had been injured. “Officers are on scene, and the London Ambulance Service have been called,” the police said. “A man . . . has been arrested at the scene. Inquiries to establish the circumstances and motive are under way.

The level was briefly raised to Critical — meaning an attack is imminent — after last month’s botched bombing at Parsons Green on the London Underground.

The Metropolitan Police on Saturday declined to give any further details of whether the incident was being treated as terrorism.

Exhibition Road — home to the Science Museum as well as the V&A and Natural History museums — is normally very busy on Saturday afternoons with families and tourists visiting the area’s attractions.

In March, Khalid Masood killed five people in an attack in Westminster that started with his driving a vehicle along the pavement on Westminster Bridge before he stabbed a security guard outside the Palace of Westminster dead. Masood was subsequently shot dead.

In June, eight people died when three militants drove a van along the pavement on London Bridge before stabbing visitors to Borough Market.

Later in June, a man died outside Finsbury Park mosque, north London, after a rented van was driven into a group of worshippers.