Why referendums – like Brexit, Kurdistan and Catalonia – are always doomed to fail 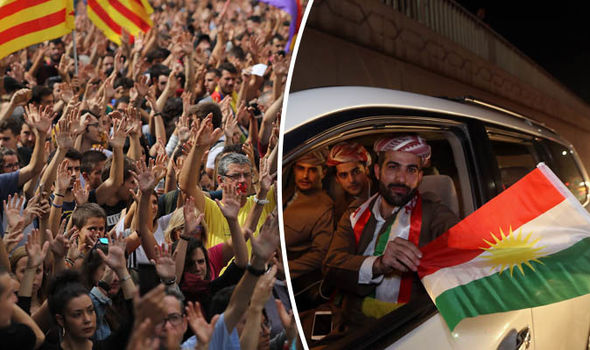 Catalan and- Kurdish Referendums
Share:
Referendums make public opinion easy to manipulate because what voters are being asked to assent to is most often wishful thinking and what they are opposing is a rag-bag of unrelated grievances.

Brexit, Krexit and Crexit: Britain leaves the EU, Kurdistan declares independence from Iraq, Catalonia secedes from Spain – three massive political changes either under way or put on the political agenda by recent referendums. Three very different countries, but in all cases a conviction among a significant number of voters that they would be better off on their own outside any measure of control by a supranational authority like the EU or a nation state like Iraq or Spain.

Referendums have a lot to answer for: no wonder divided governments, demagogues and dictators have such a fondness for them. They have the appearance of popular democracy and give the impression that important decisions are finally being made by reducing complex questions into an over-simple “yes” or “no”. They make public opinion easy to manipulate because what voters are being asked to assent to is most often wishful thinking and what they are opposing is a rag-bag of unrelated grievances. There are a great many unhappy and dissatisfied people in the three countries which have voted in referendums in the last 15 months, but no reason to suppose that their vote will make them happier or better off.

The lack of substance in promises of good things to come should be more obvious than it is. It is particularly obscure in Britain because the pros and cons of Brexit are debated by both sides in economic terms, or in relation to the impact on immigration. The discussion is almost entirely in the future tense, but in practice the main disasters flowing from Brexit have already occurred.

From the moment the polls closed on 23 June 2016, British society has been deeply divided, probably more so than at any time since the 17th-century civil war 375 years ago. “It really is like a civil war without the gunfire,” said one commentator to me last week, speaking of the depth, rancour and lasting nature of these divisions. The Government is so split that it has yet to find enough common ground to get rid of Theresa May, even though she seems to be having a rather public nervous breakdown.

There is another danger at work here. The Brexiteers hark back to a golden British past when Britain stood alone and was the workshop of the world aided by the virtues of free trade. But this is a misreading of British history: being on the winning side in the Napoleonic and in First and Second World Wars had less to do with economic strength and more to do with naval power and skill in making alliances. Once again, the weakening of the British state is not something which will be postponed until after some elastic transition period – but has already begun.

The British experience of referendums is not unique and has parallels elsewhere. Experience shows that referendums are always used by the winning side to pretend that their majority, however slim and however low the turnout, represents the undivided national will. In fact, the 52 to 48 per cent Brexit vote reflected exactly that: a country split down the middle. The turnout in the vote in Catalonia last Sunday was only 42 per cent, but the Catalan Prime Minister is expected to declare independence if he is allowed to address parliament on Tuesday.

As is so often in history, those who want to carry out radical or revolutionary change do not get anywhere without provoking an unreasonable and counter-productive overreaction by those who want to preserve the status quo. It should not have required much consideration for the Spanish government to realise that sending in the national police to try and fail to stop the referendum, while beating up ordinary people in front of television cameras, was the best way to win sympathy for the pro-independence side. Hailing the Catalan chief of police, Josep Lluis Trapero, before a judge in Madrid on suspicion of sedition against the state, is likewise guaranteed to do nothing but give legitimacy to those holding the referendum.

The self-destructive idiocy of governments when defending their own interests never ceases to amaze. Those who justify their power by maintaining law and order cannot suddenly behave like thugs without wounding their authority. I remember half a century ago – in Northern Ireland in 1968 – asking a civil rights organiser about the next steps to be taken by his movement, which was seeking equal rights for Roman Catholics in a sectarian Protestant-run state. He said that he and his colleagues had just voted at a meeting to do nothing, but instead to wait for the government to make another crass mistake such as allowing the police force to attack peaceful civil rights marchers in front of photographers and television cameras. This the government duly did.

The referendum in Iraqi Kurdistan on 25 September has distinct features, but also points in common with other referendums: the vote was for or against independence for the Iraqi Kurds, the poll taking place in territories disputed by the Iraqi government as well as in Kurdistan Regional Government (KRG) areas. It appears to have been called by KRG President Masoud Barzani to wrap himself in the Kurdish flag and present himself as the standard bearer of Kurdish nationalism. It can be taken as a given that most Kurds want an independent state, but the question is how feasible this is.

The vote was useful to Barzani in giving him legitimacy, though his term in office controversially ran out in 2015. Despite the KRG’s near economic collapse, Barzani has been able to divert attention from this and present the non-binding referendum result as a panacea or cure-all for the troubles of the Kurds, many of which are the fault of the corrupt and dysfunctional KRG government.

There is another similarity between Brexit and Krexit: Leave politicians in the UK pretended to voters that the balance of power between the UK and 27 EU states was equal and negotiations could proceed on that basis. Mr Barzani likewise said post-referendum he would negotiate independence directly with a compliant government in Baghdad. Of course, this was fantasy: May and Barzani both have weak hands to play against much stronger opponents. Baghdad is saying that there will be no negotiations about anything until the results of the referendum are annulled, and Turkey and Iran are in a position to squeeze the KRG into compliance.

In fact, Britons, Kurds and Catalans are more like Edward Lear’s Jumblies, who famously went to sea in a sieve despite warnings that they would all be drowned, to which the Jumbles replied: “Our Sieve ain’t big / But we don’t care a button, we don’t care a fig / In a sieve we’ll go to sea!”
INDEPENDENT UK