Lebanon’s greatest sights are back on the travel map

The redrawing of  British Foreign and Commonwealth Office (FCO) advice on a given place tends to elicit a certain amount of media coverage – particularly when the change is for the positive.

The news that the ban on all but essential travel to Tunisia – brought in after the terrorist atrocity in Sousse in June 2015 – was being lifted made headlines in July. The reemergence of Sharm El Sheikh as a destination – it has been out in the cold since October 2015 due to FCO advice against flying to its airport, which effectively stops British companies from selling holidays to its beach resorts – will be greeted with loud cheers and whoops of delight by tour operators and winter-sun lovers alike as and when it eventually happens.

But the same government department’s recalibration of its guidelines on visiting Lebanon – a number of restrictions were excised on Monday – has caused barely a murmur of comment. 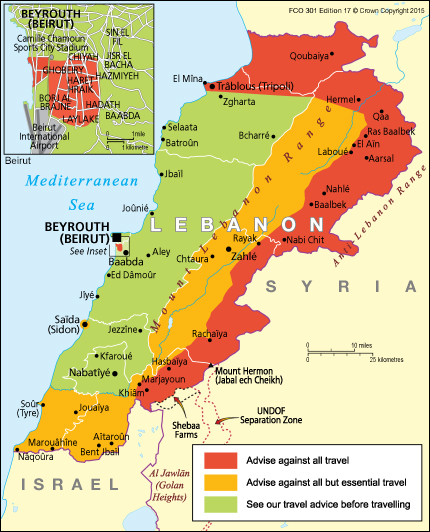 This is hardly a surprise. Even in the fiery context of the Middle East, Lebanon has long been seen as a geographical basket case. It was, of course, the scene of a hideous civil war between 1975 and 1990 which, with its regular seizing of western diplomats and dignitaries as hostages, made the country a frequent presence on News At Ten.

It has also been at war this century – a brief, inconclusive conflict in July and August 2006 with Israel, with whom it shares a fractious southern border. It has a further border, to the north and east, with Syria, whose problems need little explanation.

In this context, the “announcement” that the FCO has significantly broadened the areas beyond Beirut to which British travellers can now feasibly travel was never likely to be the stuff of water-cooler conversations and coffee-morning chat. Lebanon’s bullet-scarred history has long made it a niche option for holidaymakers, and the shifting of blocks of green onto an FCO map that, until this week, was largely coloured yellow and red, will not change that.

Nonetheless, the updated advice is a welcome development for those who like to travel in underappreciated, and often misunderstood, corners of the planet.

Beirut, it should be explained, was not part of the most recent travel restrictions (at least, not entirely – certain outlying sections of the city are still deemed off limits. See gov.uk/foreign-travel-advice/lebanonfor full details). It is a city of cosmopolitan charms, scarred but not destroyed by the woes of the last five decades, which tends to surprise all who pay it a little attention. The bars and restaurants in the lively districts of Achrafieh and Gemayzeh have a pep and sophistication that you might expect in more celebrated European capitals, the busy district of Hamra swirls with Arabic coffee shops and a pleasing vibrancy, and Ramlet al-Baida is a beach whose loveliness reminds you that, just like Cannes, Barcelona and Valencia, Beirut is a city on the Mediterranean’s edge.

However, for much of the last decade, Beirut has been just about the only segment of Lebanon that the FCO has regarded as safe for travellers – a case of slim pickings that has caused many holiday companies to place the country into cold storage. After all, if you are a tour operator, but cannot offer an actual tour of a destination that has myriad archaeological sites and historic places, then the best course of action is to forget about selling it until a brighter window opens, and concentrate your time and skills elsewhere.

Happily, this week’s FCO changes bring several feted Lebanese locations back into play. Byblos, 23 miles up the coast from Beirut, is one of them; an essential piece of the jigsaw which stood as one of the foundation stones of ancient Phoenician culture – and retained its importance into the Middle Ages via an epic Crusader castle.

Sidon, 27 miles down the shoreline from the capital, is another key stop – home to another Crusader fortress, and an old town whose maze of alleys is filled with intriguing shops. And Tyre, a further 23 miles south of Sidon, is a dusty wonder, home to the Al Mina archaeological site, where the ghosts of the Roman Empire stride through triumphal archways and between tumbled columns – while the Mediterranean sweeps in beyond.

The alteration in advice also liberates the southern portion of the Bekaa Valley – the fertile trench which runs south-west-to-north-east up the middle of the country. Its rich soil has long made it a productive proposition for wine-making. The Romans were wise to this, and the trend has continued. Chateau Ksara, arguably Lebanon’s most respected viticultural company (chateauksara.com), is located here (in the town of Ksara, 30 miles east of Beirut) – and the punchy reds and wines it concocts can now officially be bought and sampled by tourists where, this time last week, they could not.

Sadly, the FCO’s lessening of its concerns about Lebanon does not quite stretch to what is, for those who know of it, the key reason to head to this fragment of the Middle East.

The remains of Baalbek – a Roman city of considerable size and beauty – are still out of reach. They sit in the upper half of the Bekaa Valley – alas, a little too close (about 10 miles away) to the Syrian border for the comfort of those who study the security reports in Whitehall. If this is undoubtedly good sense, it is also an ongoing shame for those who like to travel with one foot in the distant past. The site’s Temple of Bacchus is as astonishing a piece of second century (AD) architecture as you can find anywhere on the globe – and in an era when Palmyra (in Syria) and Leptis Magna (in Libya) are impossible to visit, its continued absence from itineraries is to be mourned.

Of course, the FCO guidelines may change again, sweeping Baalbek back into the fold. Equally, they may constrict once more, if another explosion or burst of gunfire sees a rush to caution.

The point, perhaps, is to seize the moment. As yet, few of the most established companies who have traditionally operated in the country have announced a return – but it may be worth keeping an eye on the relevant website pages at Cox & Kings (coxandkings.co.uk/destinations/middle-east/lebanon), Steppes Travel (steppestravel.com/middle-east) and Explore (explore.co.uk/destinations/middle-east/lebanon) for signs of life.

Alternatively, Corinthian Travel (020 3583 6089; corinthiantravel.co.uk/destination/lebanon-holidays), which has continued to work in the country in recent years, offers a range of trips – including an eight-day “Classic Lebanon” jaunt which calls at Tyre and Byblos as well as Beirut – from £2285 per person (not including flights).