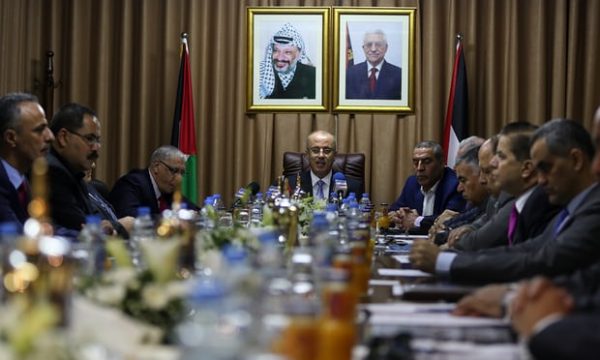 The internationally recognised Palestinian government, headed by President Mahmoud Abbas, has met in Gaza for the first time since 2014, amid fresh efforts to end a decade-long split between the West Bank and the Hamas-controlled coastal strip.

A delegation led by Abbas’s prime minister, Rami Hamdallah, held a cabinet meeting in Gaza amid difficult negotiations for Abbas’s Palestinian Authority, which runs the West Bank, to take over the administration of Gaza where more than 2 million people live in poverty.

It was the first meeting of the cabinet in Gaza since November 2014, and comes a day after Hamdallah entered the territory for the first time since a unity government collapsed in June 2015.

The negotiations have been facilitated by Egypt, largely by Cairo’s directorate of general intelligence, which has indicated an increasing willingness to play a role in Gaza.

The head of Egyptian intelligence, Khaled Fawzy, has been a key figure in the negotiations and is due to visit Gaza to meet Hamas officials, including its leader, Ismail Haniya.

The fraught and long-running attempts to reconcile Hamas and Fatah have been given new impetus by Hamas’s increasingly isolated position after 10 years in charge of Gaza, a period that has seen it fight three conflicts with Israel.

In a statement, Hamdallah pledged to end the rift.

“We are here to turn the page on division, restore the national project to its correct direction and establish the [Palestinian] state,” he said.

“We understand that returning official institutions to their legitimate and legal framework and ending all the impacts of division will require exhausting efforts and a lot of patience, of time and of wisdom.”

Hamas ousted the Fatah-led forces of the Palestinian Authority in the summer of 2007, having won the most seats in elections the year before. It left Palestinians torn between rival governments on opposite sides of Israel.

Hamas has ruled Gaza, while Abbas’ party has controlled autonomous enclaves in the Israeli-occupied West Bank.

The meeting followed the announcement last month by Hamas that it was willing to cede civilian control in Gaza to Abbas’s Palestinian Authority in the hope of relieving the Israeli and Egyptian economic blockade of Gaza.

However, Hamas has refused to disarm its militant wing and is reportedly pressing to retain control of the strip’s security forces and border crossings.

That demand was rejected by Abbas in an interview with Egyptian television on Monday. He insisted there could be only “one state, one regime, one law and one weapon”, reiterating his long-held position that security should only be in the hands of the Palestinian Authority.

A spokesman said Abbas would not lift sanctions on Gaza at this stage but rather await the outcome of talks planned between Fatah and Hamas in the next two weeks. Pressuring Hamas to loosen its grip on Gaza, he halted payments for Israeli-supplied electricity to the enclave in June, a step that has led to lengthy, daily blackouts. He has also withheld salaries for Gaza civil servants.

Hamas is blacklisted as a terrorist organisation by the US and the EU, complicating the formation of any unity government.

The White House special envoy, Jason Greenblatt, wrote on Facebook: “The United States welcomes efforts to create the conditions for the Palestinian Authority to fully assume its responsibilities in Gaza.” However, in an apparent reference to Hamas, he said any Palestinian government “must unambiguously and explicitly commit to non-violence, recognition of the state of Israel, acceptance of previous agreements and obligations between the parties and peaceful negotiations”.

The latest developments have come as Hamas finds itself increasingly isolated internationally, not least by the Saudi-led embargo of Qatar, a long-time supporter of Gaza, which has forced Hamas to try to make its peace with Egypt.