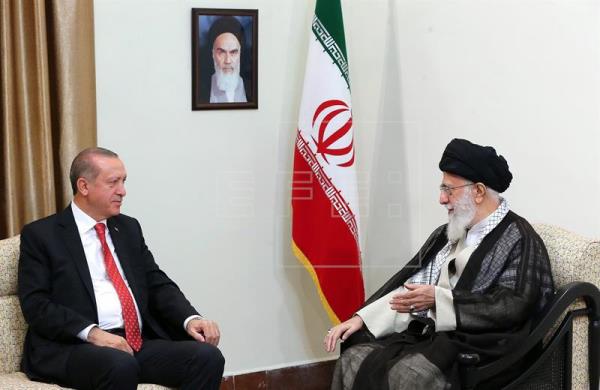 Relations have generally been cool between Shi‘ite Iran and mainly Sunni Turkey, a NATO member. But both have been alarmed by the Iraqi Kurds’ vote for independence last month, fearing it will stoke separatism among their own Kurdish populations.

“Turkey and Iran must take necessary measures against the vote … and Baghdad should make serious decisions … serious and rapid decisions must be taken,” Khamenei was quoted as saying.

“The Iraqi Kurdish secession vote is an act of betrayal toward the entire region and a threat to its future.”

Iran and Turkey have already threatened to join Baghdad in imposing economic sanctions on Iraqi Kurdistan and have launched joint military exercises with Iraqi troops on their borders with the separatist region.

Erdogan, who was on a one-day trip to Tehran, said earlier that Ankara was considering taking further measures against Iraqi Kurdistan.

“We have already said we don’t recognize the referendum in northern Iraq… We have taken some measures already with Iran and the Iraqi central government, but stronger steps will be taken,” he said.

Iranian President Hassan Rouhani and Erdogan vowed to work closely together to prevent the disintegration of Iraq and Syria and to oppose the Iraqi Kurds’ drive for independence.

“We want security and stability in the Middle East … The referendum in Iraq’s Kurdistan is a sectarian plot by foreign countries and is rejected by Tehran and Ankara,” Rouhani said, according to state TV.

“We will not accept a change of borders under any circumstances.”

The central government, its neighbors and Western powers fear the vote in favor of secession could spark another, wider conflict in the Middle East region to add to the war in Syria. They fear it could derail the fight against Islamic State.

The Kurds are the region’s fourth-largest ethnic group, spread across Iran, Turkey, Syria and Iraq, all of which oppose any moves toward a Kurdish state.

Khamenei accused Iran’s arch foe the United States of planning to create a new Israel in the Middle East by supporting the Kurdish vote in Iraq.

“America and Israel benefit from the vote … America and foreign powers are unreliable and seek to create a new Israel in the region,” he said.

The United States opposed the referendum as a destabilizing move at a time when all sides in the region are still fighting Islamic State.

Erdogan, whose security forces have been embroiled in a decades-long battle with Kurdish separatists in southeast Turkey, repeated his accusation that Israel was behind the Iraqi Kurds’ referendum.

“There is no country other than Israel that recognizes it. A referendum which was conducted by sitting side by side with Mossad has no legitimacy,” he said, referring to the Israeli intelligence agency.

Israel has denied Turkey’s previous claims of involvement in the vote, but has welcomed the Kurds’ vote for independence.

Rouhani also said that Tehran and Ankara planned to expand economic ties. “Turkey will import more gas from Iran… Meetings will be held to discuss the details,” he said.