Violence Breaks Out at Turkish President’s Speech in New York 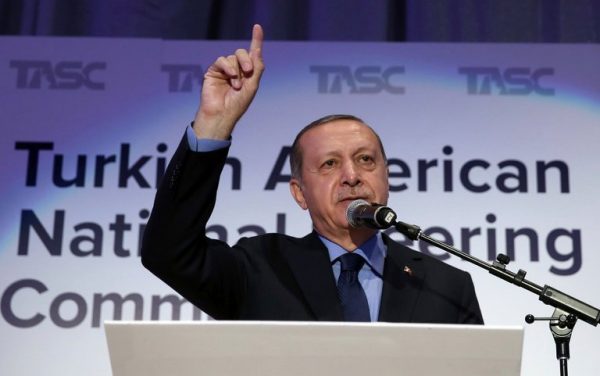 Violence broke out at a New York hotel Thursday afternoon when protesters disrupted a speech by President Recep Tayyip Erdogan of Turkey.

In the middle of Mr. Erdogan’s speech, delivered in Turkish, a man — one of a handful of protesters — screamed in English: “You’re a terrorist. Get out of my country!” The ballroom at the Marriott Marquis hotel in Times Square instantly erupted, with many attendees chanting Mr. Erdogan’s name to drown out the protesters.

Videos showed the protesters — one of them wearing a T-shirt emblazoned with a picture of Michael Israel, an American who was killed in a Turkish airstrike while volunteering with the Kurdish People’s Protection Units, or Y.P.G. — being punched and slapped by several attendees as security personnel removed them from the room. Security also removed at least one person who had assaulted the protesters.

Meghan Bodette, who identified herself as one of six protesters (one of whom was filming), said their goal was “to call attention to the Turkish state’s war crimes and human rights abuses against the Kurdish people,” both in Turkey and in Syria.

“Erdogan should not be able to speak here unchallenged, and we challenged him because the American people need to know that a state that claims to be our ally is hindering the fight against ISIS in Syria and destroying civilian lives,” Ms. Bodette said in a Twitter message.

The young man was pulled out of the room, Mr. Demir said, and the woman left on her own after being told to do so. But Mr. Demir said he saw security guards push the middle-aged man, who fell to the ground. He did not know whether the guards were part of Mr. Erdogan’s detail, the United States Secret Service or the hotel’s security team.

“The third man screamed, and people were screaming at him,” he said. “It didn’t take long. Seconds, really.”

Mr. Demir said he later saw the man on the floor, handcuffed, outside the ballroom where Mr. Erdogan was speaking at the invitation of the Turkish American National Steering Committee.

The New York Police Department said about five protesters were “briefly detained.” No arrests were made, and no injuries were reported.

Kathleen Duffy, a spokeswoman for Marriott International’s New York City hotels, estimated that more than 2,000 people had attended the event and said that only “a very small” number had been escorted out.

“It appears that it started when pro and anti demonstrators kind of clashed, and it started a little bit of a physical confrontation,” Stephen P. Davis, the Police Department’s chief spokesman, said. “But at that point, the people were separated and broken out and brought out of the venue.”

Mr. Davis cautioned that the understanding of what happened was still preliminary.

A police official, who spoke about the investigation on the condition of anonymity, said it appeared the fight had been instigated by competing protesters, not by Mr. Erdogan’s security forces, who have a history of violent run-ins in the United States.

In 2011, the security forces took part in a fight at the United Nations headquarters in New York that sent at least one officer to the hospital. Last year, they, along with police officers, clashed with demonstrators outside the Brookings Institution in Washington.

In May, during Mr. Erdogan’s last official visit to the United States, members of his security team attacked a group of peaceful protesters outside the Turkish ambassador’s residence in Washington. Nine people were hospitalized, and video showed the episode in vivid detail. Another video emerged showing Mr. Erdogan himself watching the attack from a Mercedes-Benz sedan parked a few yards away.

A grand jury in Washington indicted 15 Turkish security officials, as well as four civilians, on assault charges in August.

That attack and the subsequent charges strained the relationship between Washington and Ankara, already tested by Mr. Erdogan’s authoritarian actions in Turkey. The State Department condemned the violence and said actions intended to limit free speech would not be tolerated on American soil. Mr. Erdogan, for his part, accused American officers on the scene of bungling the situation.

After Thursday’s episode, however, Mr. Erdogan — who was in New York for United Nations General Assembly meetings — seemed unbothered. Immediately after his speech, he met with President Trump and American diplomats, and he and Mr. Trump had little but praise for each other, at least as they smiled for photographs.