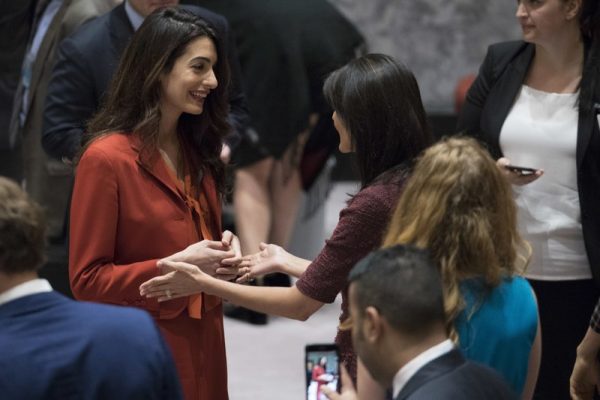 Iraq, council members and some human rights advocates portrayed the measure as a key step toward bringing the Islamic State group to justice for atrocities. But some major rights groups say it’s one-sided and overlooks abuses by Iraqi and other forces fighting the IS militants.

The council voted unanimously to ask the U.N. to establish an investigative team to help Iraq preserve evidence “that may amount to war crimes, crimes against humanity and genocide” committed by IS, variously known as ISIS, ISIL and Daesh.

“This means justice for those people who have been victimized by ISIS,” Nadia Murad, a former IS captive in Iraq, said in a Facebook Live video after attending the council vote with well-known human rights lawyer Amal Clooney.

IS militants seized parts of Iraq in 2014 and proclaimed it a caliphate under Islamic rule. It soon became a realm of horrors, including mass killings, beheadings and rapes.

U.S.-backed Iraqi forces retook the country’s second-largest city of Mosul from the extremists in July. The forces have now driven IS from most of the land it had seized in Iraq, retaking all the major urban areas, although the group still controls some pockets in Iraq as well as territory in Syria.

Iraq and Britain have spearheaded the investigative measure. After it passed, Alastair Burt, the British minister of state for the Middle East, announced that the U.K. would provide 1 million pounds ($1.35 million) to the investigative effort.

It has a prominent champion in Clooney, who represents members of Iraq’s Yazidi religious minority who were raped and kidnapped by Islamic State militants.

“It’s a huge milestone for all of those who’ve been fighting for justice for victims of crimes committed by ISIS,” the Lebanese born British attorney, who is married to actor George Clooney, said in the Facebook Live video. “It says to victims that their voices will be heard and they may finally get their day in court.”

U.N. investigators will be able to help identify victims and perpetrators and “provide an indispensable record of the scope and scale” of IS atrocities, U.S. Ambassador Nikki Haley said. Burt said the measure gives priority to Iraqi courts to try the cases but left a door open for other courts to get involved.

But Amnesty International and Human Rights Watch said it came up short.

“No one denies the importance of tackling the widespread atrocities by ISIS in Iraq, but ignoring abuses by Iraqi and international forces is not only flawed, it’s shortsighted,” said Balkees Jarrah, the rights group’s senior international justice lawyer. “The pursuit of justice is essential to all victims … regardless of who is responsible.”

Iraqi Prime Minister Haider al-Abadi has admitted that anti-IS forces have committed abuses, but he insists they were not “systematic” and that those responsible are being held accountable. Human Rights Watch, however, says many such abuses aren’t being investigated by authorities in Iraq, as far as the group can tell.

The British U.N. mission said in a statement that given the severity of IS’s atrocities, it’s vital to take steps now to keep evidence from being lost.

“We need to act where we can, when we can,” the mission said.